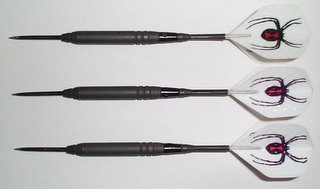 These were indeed the second set of expensive darts I have ever bought. And as with the ones before them I got them only because of the 50% discount offered through my home bar when I played league several years ago. They are 28 gram fixed point black widows by Laserdarts. They are too heavy for my taste and if I'd known then what I know now, not only would I have bought the 24 gram version, or none at all. They are not my favorite darts by a long shot even though I used them for most of a season and I had some amazing nights with them. One semi-finals I had 152 left and finished in four darts. I shanghai'd the 20's first round and then nailed the double 16. I remember that night well. I felt like I could not miss, and I even had a non-dart friend there watching. We beat the opponents 12-0 that night and then went on to win the finals as well. Here is the break down of them as pictured: