SOLD! So another victim of the Purge is pictured below. The Lewis darts which I recieved in trade several months ago have found a newer better home where they might actually get some air time. 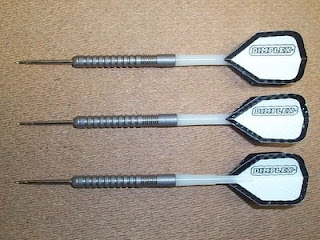 I think I would have liked these darts quite a bit more had they been just a little bit more on the short side. I threw them for a very short while and never in league. One of the characteristics that I really do like about them is the width of the grooves near the front of the barrel which is where I go my primary gripping. While this may not be my favorite dart that I have ever thrown, I am certaily glad that it passed through my collection even if in a highly transient manner. It is good to get to know the different darts out there and also it is nice to feel the darts in your hands that the top ranking pro's use. It is like having an exact replica of Ichiro's bat for example.
SOmetimes I wonder if it would not be a good idea to keep a set of Phil Taylor's current preferred dart on hand even if it is not my style dart. That way if I ever get itchy fingers and start feeling the call of the online dart stores I can pick them up, throw my 26, and think to myself: "If Phil were throwing these that would have been a maximum." Why you ask? What better reminder is there that it is not in the darts, but in the thrower.
Posted by Zeeple at 4:00 AM No comments:

A New High In 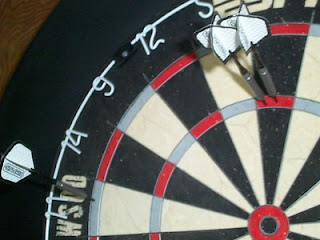 The above pic was taken in my garage a long time ago. It was a fine moment for me although it occurred in practice and while I was alone. On Thursday however, I repeated the feat (a 142-In: double 22, triple 20, triple 20) during my second singles 301 game against AR's captain (Dart Dwarf). That game was a modest ten dart game for me: 142, 59, 60, 40 (first dart) but it made me feel good, and it fueled my team's desire to win. I also had a very enjoyable cricket game against Paul. I was out of the gate early forcing him to chase most of the game, until I couldn't hit my 15's. He killed the 15's forcing me to point him elsewhere (20's) and then once I finally got my 15's he killed the Bulls (as he always does). I did barely beat him though, but it turned into a minor point war and got my heart racing a little bit (which I like).
Posted by Zeeple at 12:04 PM No comments: