Thinning Out the Herd

I would be very happy if I could get my collection down to about 36 to 48 sets of darts. really this should not be too difficult considering that I have several sets of darts that I simply do not like and several other sets that I like well enough but feel no special attachment to, and which I never throw. The set below belongs to the later group. They are really good darts with an excellent grip but I never really throw them anymore. When I used to use them more I would dress them in hammerhead points and slim flights and they perform very nicely. the depressions in the barrel for the fingers are amazingly well thought out. The other night my buddy Byron came over and I used these guys and hit several low tons. I was happy. I'd also forgotten how well I like those spiraline flights! 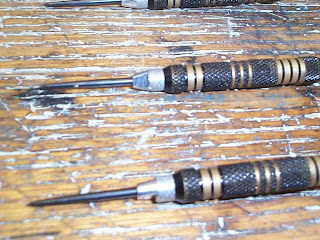 In the above photo you can see the points that I currently have on them. They are ordinary plain (but oddly sharp) conversion points and their sole function is to help the dart stick in a bristle board. Not very aesthetically pleasing but that is not really a requirement (okay I don't really believe that). The flights are amazing although I freely admit that these days I use mostly plain slim flights. They have a lot of drag but that is compensated by how true they fly. 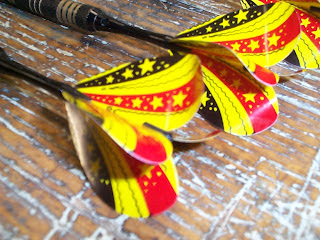 I think I'll throw some hammerhead points on them this week and reminisce a little bit before they gat bought up on ebay. If they get bought that is. This is my first bay offering and they is no garantee that they will be bought. 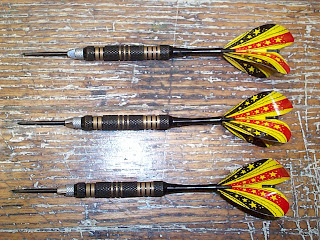 Posted by Zeeple at 9:18 PM No comments: