Sometimes it is advantageous to have all of your dart collection on one page of thumbnails :) 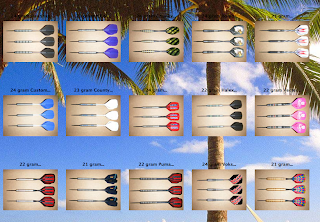 The link is here:


and also on the upper right of the blog at the top of the link bar. I'll try to keep it current but that may be challenge give how frequently I trade away darts in my collection.
Posted by Zeeple at 10:17 AM 3 comments:

This is a recent acquisition that left me feeling ambivalent almost immediately. Perhaps I just need time to warm up to them. 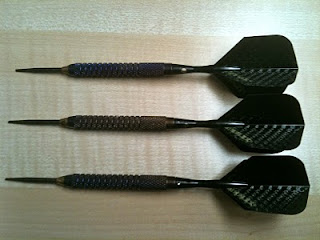 I was attracted to them in the first place for several reasons, first and foremost because I occasionally lament the trading away of my Bottelsen Gorilla Grip Hammerhead darts, and these seemed like a more affordable version of that dart. However, the nature of the mechanism that moves the point seems odd to me. I am thinking about replacing the points these darts came with with something else.
Posted by Zeeple at 7:41 PM No comments:

Last night was a great finals match in the ECDO B League. Of course, our team was probably playing slightly below its level, given that we likely would have signed up for the A League if it weren't for all those darn Thursday night soccer practices, and also given that we (for the most part) decimated every team we hit this season. So on the one hand it was no surprise that we won the finals but on the other hand, the team we played against in the finals matched was able to keep it close and pushed us all the way towards the far end of the score sheet. They took eight off us in the end. So I am happy for a lot of reasons. I am happy because we won and that always feels good, but I am also happy that we had to fight for it in the last match of the post season. If it were an easy victory I am certain it would not have meant that much to us.

The darts I used last night were the 26 gram Mavericks that I picked up off a defeated player way back in the day, and the recently acquired 24 gram 95% Parts. They both threw pretty well for me last night although I think I get a slightly better vibe off the Parts than off the Mavs. I did not wow myself in my performance last night by any measure with one exception (other than a general trend toward winning that is) and that one exception was a singles cricket match I played against one of their better, more seasoned players (Russ).

The cricket match started off with quickly closed 20's but he left the door open on the 19's. I had one already and threw a 7-count in the 19's to leap ahead early by 95 points. From that point on I stayed a steady course, closing (or opening) each number as I came to it up until the 16's then, after a single mark round I picked back up and finished the game with few misses and it was a clear decisive victory from the outset. So I was happy with that win more than any other of the night. My other singles was a 401 win over one of their weaker players, but that game was close. We both had several rounds throwing at our outs before I finally hit my D10 to win. A close call.

The evening started out with a small scare actually. They won the first three games of the match and it was not until I won my singles 401 game that we even had a non-zero score. But we won 4 of the 5 crickets and got a slight lead on them (Who Darted?). We kept that one game edge on them most of the night, until we got into the doubles cricket where we took 3 of the first 4 to win. I enjoy the team we have. Dart Maul was fun but I am hoping for a different team name in the Spring.

Cocodarts has a nice ring to it :)
Posted by Zeeple at 3:04 AM No comments: 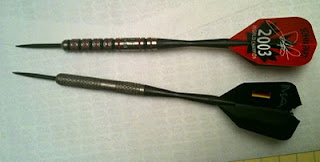 The above pic is the darts I used tonight. The set with the red stripes is the primary set and the 21 gram Magnums were the go to set for when the main set felt weak. Tonight though I almost used them interchangeably. I felt good all nifty so there was not the constant changing of darts that I sometimes fall into when I am simply not hitting my targets.
Posted by Zeeple at 11:57 PM 2 comments:

These darts are one of the more interesting sets in my collection, but due to the way they conflict with my preferred gripping style, I'd rather trade them out of my collection for something more appealing to me. It is a 90% tungsten dart, relatively short, with a very unique stem application. The stems are actually the top portion of the "Spinster" stems, available from sites such as A-Z Darts. The pic below indicates how they are currently configured, with Spiroline flights and flight protectors. As you can see there is a wee bit of rust on the points due to non-use, but this can be very easily removed with a fine grit sandpaper and the tungsten in the barrels has darkened just slightly with age.

I picked these beauties up at least five years ago and I still have the original case the came in. In the pic below you can see there is one spare set of stems (which are super super short) and the info card that comes with the darts. The spare flights were chewed up years ago (but they don't last long anyway). 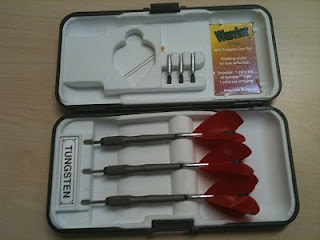 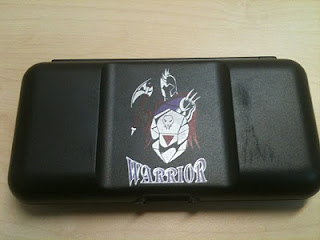 There is no threading in the back of the dart. The stems are a push-in system and they spin too which makes the stem application doubly interesting in my opinion. 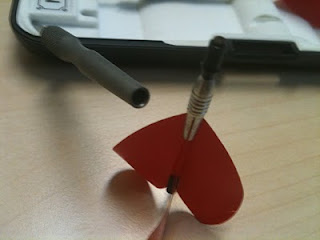 I have found a new home for these darts tho. They will soon be making the long happy journey to their new owner in the UK (who goes by Littleman124 over at DartPlayer.net). I am happy to have known them and had them in my collection but I to keep darts that will almost never be thrown again by me seems pointless and a little cruel. In exchange, I will be receiving a set of mature (grizzled, even) CT Fatties. I am looking forward to their arrival.
Posted by Zeeple at 8:59 PM No comments: