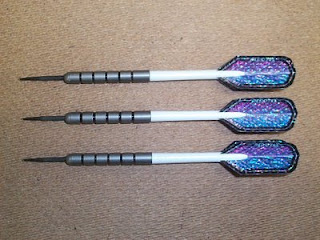 These darts served my extremely well last season. They are really kick ass darts and I think I'll hang onto them for a while. The story of how I got them is pretty good. Be careful though I am a revisionist sometimes without looking. One night last season (this would have been the Fall 2008 season) I wandered into the Kort Haus for a match against one of their teams. I noticed that above the door Ed (the proprietor) had hanging a glass display case of darts stuff in it. So I drug a chair over to the door, stood on it, and peered into the case. I saw them sitting in the back, lonely and covered with dust. I asked Ed how much he wanted for them. He said he couldn't let them go for fewer than 45 dollars. I offered 30. He said he couldn't do it so I said okay and continued with the match. A few hours later when the match was over I asked him if he wanted to sell the darts or if he was content to let them sit up in that case for another decade and he said he just couldn't do 30 bucks. I offered 35. He said okay. One of the best purchases I ever made.
Posted by Zeeple at 12:32 PM