Tonight I hit my 48th lifetime Ton-80, and it is my 4th for the year (I believe).  The darts in use are 25 gram Accudart 301's, which are a mixed material barrel.  The front half is tungsten, and the back half is brass. (Like the dart version of a mullet, I guess.)  The stem is a short 1/4" threaded aluminum, and the flights are standard dimplex. 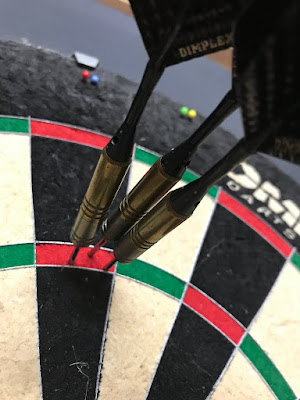 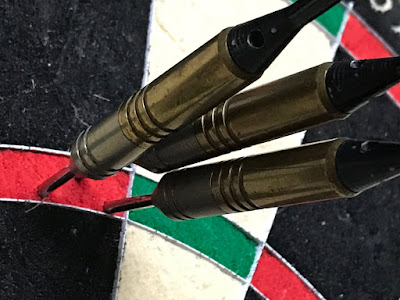 By way of comparison, here they are next to a 20 gram tungsten UFO: 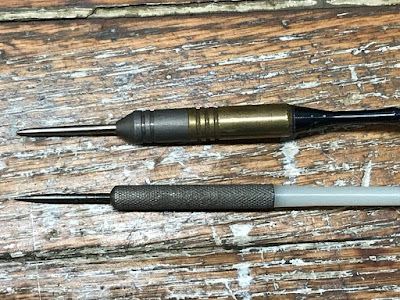 Posted by Zeeple at 8:24 PM No comments:

An Abortive Outing (But a Good One)

On Monday night I had a couple hours to kill before I had to run an errand and so I dropped into the local knowing that there'd be a singles tournament starting at 7:30.  I entered the contest knowing I wouldn't be able to finish it, and the organizer was okay with that.  Since it was a double elimination event he figured that if I played poorly enough it wouldn't matter.

The next match I played I thought for sure I'd get smashed.  The guy was quite a good shot and hot, hot, HOT on the 17's.  Oddly though, I kept up and was able to win 2 - 0.  The first leg was a pitched battle.  He shot a 2.7, I shot a 2.9.  He had 2 5-mark rounds, I had a single 6-mark round.  I accumulated 341 points, he had 309 points.  My opponent, a San Franciscan transplant named Tom, hit a whopping 18 17's during the game.  I was only able to beat him because I had zero dead rounds, and was able to stay ahead in most numbers getting a little bit of points here and there to counter his incredible slew of 17's, and also because I hit 2 double bulls in the last two rounds to finally catch up in points and put a bow on it.  That was a great game.  And a fun one.

The next leg I also won, 96 - 87.  I hit no high-mark rounds but I also didn't have any dead rounds.  We both shot a 2.2, and in the end I was able to catch up in points and end the game by hitting four bulls in the last two rounds.  Bulls practice is helpful.

Then I had to leave which is too bad since I was still in the winner's bracket.  At least a couple of guys got a couple of free wins off me in my absence so good for them.

The darts I took with me were the 16 gram Harrows Magnums that I hit my last Ton-80 with at home: 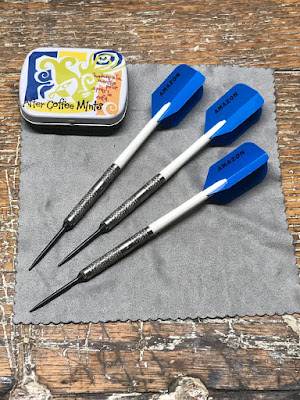 As you can see, they are wearing white medium nylon stems, US Darts moving point conversions, and slim poly flights.  They are a nice little dart, although I wasn't wowing myself with them in competition like I was at home.

As you can see, everything fit into that little mints container, including an eye glasses micro-fiber cloth which is helpful for bespectacled fellows like me. 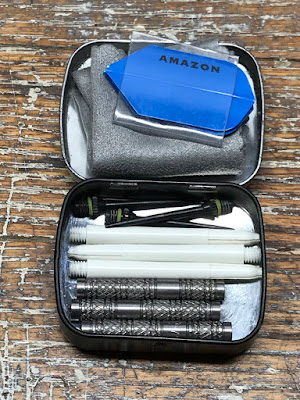 Posted by Zeeple at 9:03 AM No comments:

Hit my 47th lifetime Ton-80 tonight while throwing quite casually in my garage.  I'd spent the better part of two hours weighing various UFO sets, and having an occasional solo DIDO 301 in between.  Happily, I hit this: 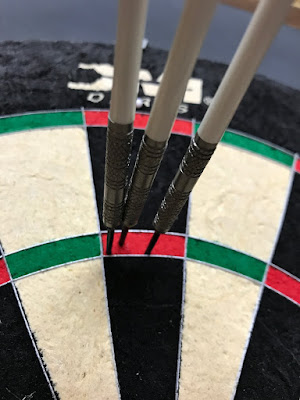 These are my 16 gram Harrows Magnums, wearing US Darts MP points, medium white nylon stems, and slim poly flights.
Posted by Zeeple at 8:45 PM No comments:

Mostly for my own reference, I wanted to assemble my collection of smooth barreled darts. 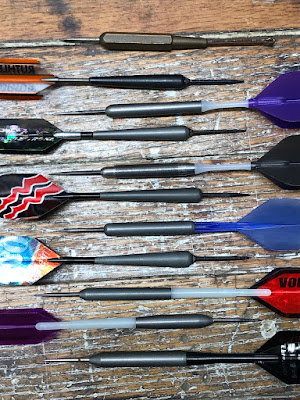 From top to bottom:

Posted by Zeeple at 8:34 PM No comments: