Hm. I cannot believe I have never made a complete list of my darts. 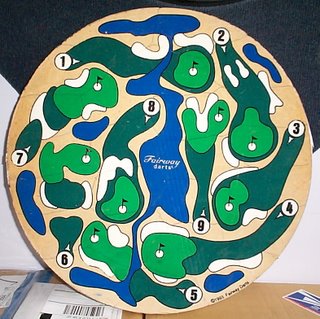 I found this board on ebay and managed to win it uncontested for ten dollars. Probably the best deal I have ever seen for a dartboard. The board itself is a sisal board and as we all know, unique and rare sisal boards are nice to find. Paper wound unusual boards are a dime a dozen as are many of the American made wooden dartboards. But since a sisal dartboard is so much more difficult to make than a wooden board (the process and materials I mean), and so much more expensive than a paper wound board, there are fewer of them.

Fairway darts is the third golf related board I have purchased for my collection. It isn't as well known as the Par-Darts board (I had never seen it before) and not as complete or pretty as the Club House Golf board but it is still a nice high quality board. I have scoured the internet looking for mention of this board and I have not seen a single reference anywhere. Not a mention in any google page or dartboard collection page. This is good from a collector's perspective because that makes it rare, but it is bad because I have no idea who made it, and no idea what the rules for the game are.

So here is a call for help: anyone with any information on this board, the maker, the era, or the rules, please let me know. Thanks!
Posted by Zeeple at 3:22 AM 3 comments: 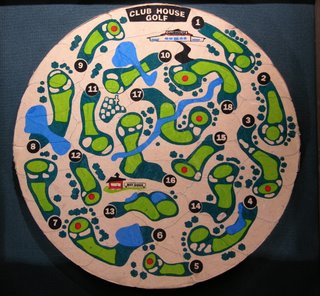 What a great find. This is one of the more interesting bristle boards I have ever seen, and I bought it in brand new condition. Any holes in the board are made by me and the ultra-light apex style darts that came with the board. My buddy Barn and I staarted throwing a game on it but it was so hard to hit the fairways and holes that we had to quit for dinner. You can really see the biscuits in the board, and I would say not very many tons of pressure went into making the board itself as the darts, even the light ones, slide into the board with minimal effort. This makes me think the board would get chewed up quickly so I will not play on it too much. 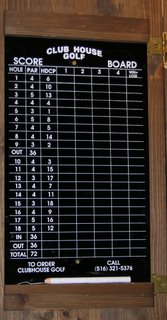 The score boards are a sort of black plexiglass with white writing on them and seem to be set up for a very particular sort of golf game. There were no rules sent with the board so I am not real sure what the exact rules are but probably they are similar to real golf. The board also came with one of those white wax markers for keeping score on the black plexiglass. Pretty clever and nice looking set up. 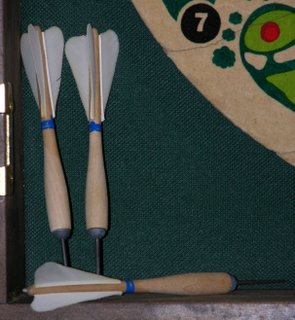 The Board also came with six ultra-light Apex darts. They only weight XX grams. I think these were included so the board would last a bit longer. The sisal fibers are so loose that if you were to throw your average 26 gram MP dart the board would be destroyed in short order!! 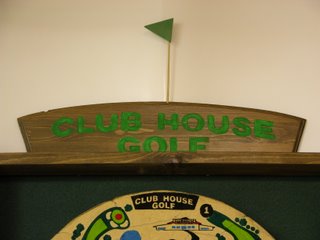 One thing I really like about this board is the attention to detail and fine craftsmanship. There are some extras that they didn't really have to include in the building of it such as the sign on top the cabinet, the little golf flag, the green material behind the board, etc. Very nicely done! Here is a good view of the overall effect: 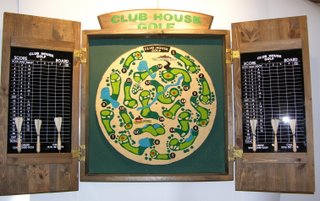 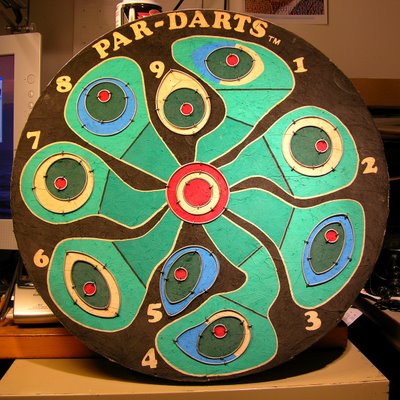 This is a very nice board that looks like it is in virtally brand new condition. Right now it is at the house of a friend in Seattle and I am looking forward to playing on it. It looks like it would be at the very least an excellent practice board, but I bet the whole game is going to be every bit as fun as a regular darts game. This is my first non-clockface board other than the baseball board below. It is certainly my first bristle non-standard board. At some point I am going to figure out how to replace those wires stapled onto the board with embedded blade-like separaters.

Click here for the rules for Par-Darts.
Posted by Zeeple at 10:00 PM 6 comments: 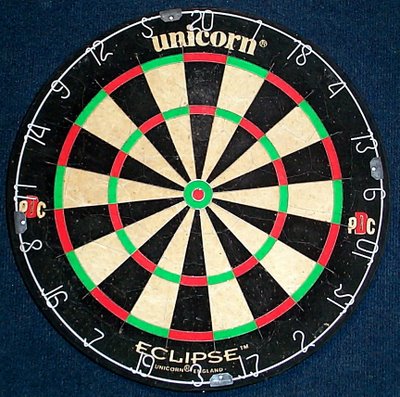 This is another of the Bladed boards offered by the various board makers. The bladed versions are almost always the "High-End" offering, and this one in particular is a pretty good board. This was a Christmas gift from my beloved in 2005.
Posted by Zeeple at 10:00 PM No comments: 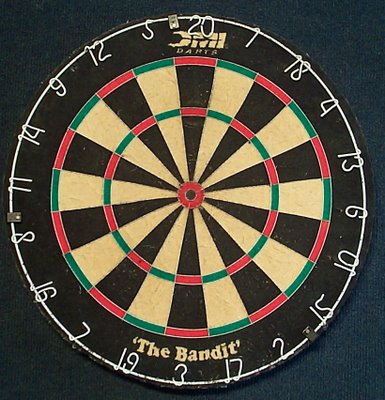 To this day I have never once had a dart just fall out of the Bandit. And I have a medium throw at best in terms of hardness. I have thrown darts at it of many weights from 10 grams to 28 grams. So I cannot imagine how people would have to throw for their darts to just fall out.
Posted by Zeeple at 10:00 PM No comments: 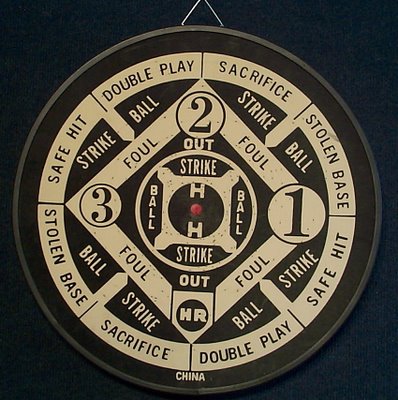 These are boards that I do not have but that I would certainly like to eventually own:

Acquired but not yet received:
1. Yorkshire
2. Clay Dartboard
3. Winmau Equalizer
4. American Wooden Board