This week's challenges all came to me very quickly.  I pounded them out within a single practice session, and all within, literally, about 15 minutes.  I don't know why exactly other than to say that I was "on".

The easy challenge went S20, S1, D17.  I was aiming for the 1 segment first but missed into the 20 bed, leaving 35.  Then I decided to try for the T1 to leave 32 but hit a single one instead, and hit the remaining 34 with my last dart.  The few rounds I attempted before this looked quite different.  I went for (and hit) the 1 first, leaving 54, which I tried to take out with S18, D18, but missed the double every time. Such is life. 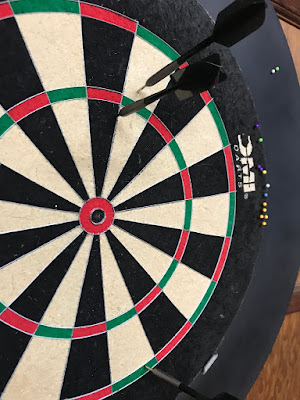 The medium also came with a few rounds.  I started trying for the T15 to leave 32 but after a few misses there I thought about the rules of the medium challenge a bit and decided to shift my strategy a bit.  The 15 is surrounded by even numbers whereas the 19 is surrounded by odd numbers so I figured if I missed the 57 into the T7 or the T9 I'd still be pretty well set for a triple double finish.  As it happens though, I hit the T19 leaving 20, which missed outside on the first dart, and then hit with the third: 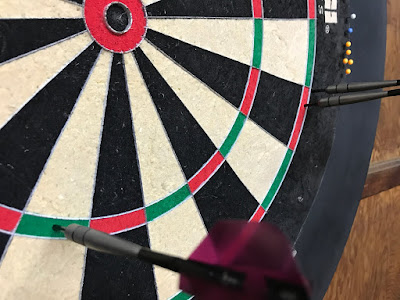 The hard challenge I git with my very first attempt at it, and hit 125 points in the bull no less.  Sometimes you're hot on bulls, sometimes your not.   Or to borrow a different idiom: Sometimes you get the bull, sometimes the bull gets you."  Today, I got the bull. 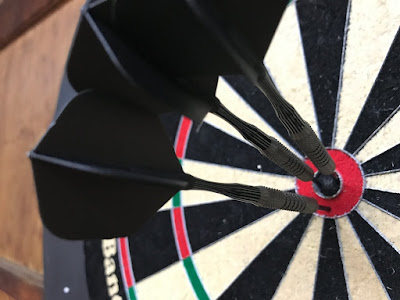