Despite my recent trend of only being able to get the easy and medium challenges, this week I hit all three, and in a single session to boot.  All three were gotten using my 18 gram Accudart Revolvers, a fluted, stainless steel offering from the once-great dart maker.  Below you can see I hit my 3 marks in the 15's with a single triple, and missing the other two (into the 2). 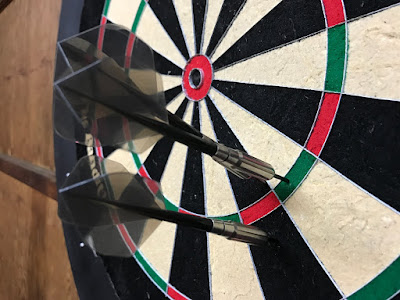 And below, I sunk the first two darts into the triple five before I completely choked on the third, landing it in the 20 bed not far from the bull.  You can barely see it in the lower right of the pic. 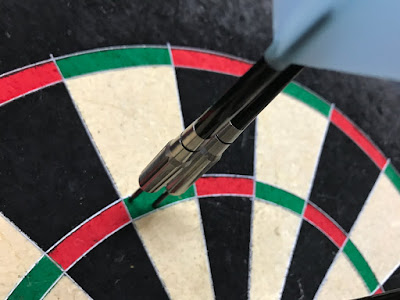 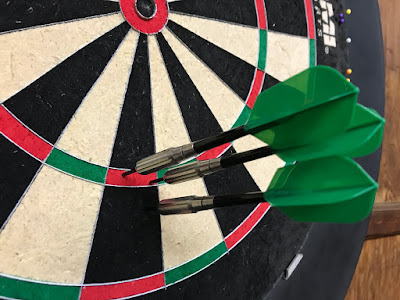 All three of these shots were hit with the Revolvers, but each has a different stem and flight configuration as I was experimenting with them, looking for the best set up.  In the first pic they are wearing short standard Condors, and in the second and third pics they are wearing short Gear Fit Stems, but different flights.  The blue ones are standard Fit Flights, while the green ones are slim Fit Flight Airs.  I continued throwing the darts for quite a while after hitting these three challenges and decided the best config for these darts is the short Gear Fit Stems and Shape Fit Flight Airs.
Posted by Zeeple at 7:55 AM