A recent discussion over at Dartsnutz.net focuses on whether it is wise to always be aiming at the triple 20 when practicing or warming up for a match.  The prevailing argument being that finishing is key to winning and so the lion's share of your practice should be in the doubles ring.  Makes sense. But I think there is a big difference between having a practice session at home and having a warm up before a match.  In the case where you are warming up before a match part of the intention is to loosen up your arm and make sure your throwing mechanics do not have hitches.  In this light, it makes sense that you should be making sure that you have aimed at (roughly) all the areas of the board, or at least all of its extremities.  Hitting all the doubles then becomes less important than aiming at all the doubles.

Furthermore, if you start practicing the doubles starting with the D1 and then working your way around the board clockwise, or with the D20 and then counterclockwise, you run the risk of getting hung up on a number and only practicing a small segment of the doubles ring before you have to start playing your match.  As such, I have devised a different kind of doubles practice specifically meant to be used before a match.  You can spend as few as 7 rounds on it and get fully loosened up and having aimed at all the doubles, or you can spend a good 20 minutes making sure you've hit all the doubles as well.  Here is how it works: 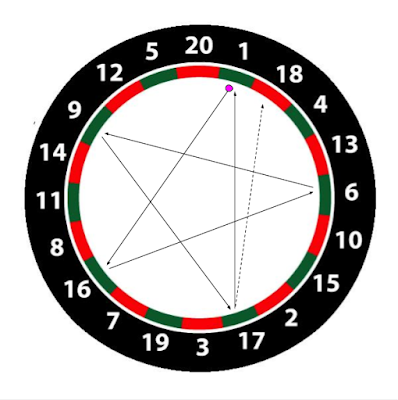 The first key to the warm up is that you never aim more than one dart at a number before moving on.  One dart per double.  You might come back to a missed double in the next round, but you never throw two at the same double in a round.  I like this aspect of the warm up pattern because in a game, you only get one dart at your out, usually, unless you miss outside, and happen to be holding more darts, but you don't want to miss outside.  Most times you have that one dart.  When you are practicing doubles and you are willing to throw more than one dart at any given double regardless of where the first dart lands than something different is happening in your mind.  You have the deep seated notion that you have more chances.  In a game you do not.  Thus, one dart per double, then move on.

As you can see from the illustration above, you work your way around the board in a star pattern with the first five darts forming the sequence: 1, 16, 6, 9, 17. Once you are holding that 6th dart whether it is aimed at the 18 (thus starting the next "rotated" star) depends on a number of things: if you are simply aiming at all the doubles then you ignore the D1 and continue the pattern of the rotating star.  The next five darts would be in the sequence: 18, 8, 10, 12, 3.  However, if your intention is to successfully hit each double as well, than you would aim at the D1 if you missed it previously, continuing the star pattern based on your hits and misses.

If your intention is to simply aim at all the doubles regardless of your success in hitting them then the sequence in its entirety is simple: 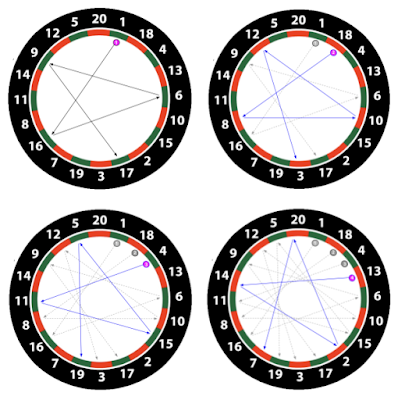 However, if your intention is to hit all the doubles successfully, then what to aim at next can be confusing (until you understand the pattern and it makes sense to you - but trust me that takes a while).  It helps to remember that there are five sets of four wedges that form each section of the star pattern, and the heads of the family are: 1, 16, 6, 9, and 17, in that order.  If you your intention is to hit then you simply remember which segment in those families you are working on for each point of the star pattern.  The happy thing is this:  once you have 1, 16, 6, 9, and 17 cemented in your mind as the starts of the star segments, then remembering where you left off for each of those is easy and this warm up patter becomes a breeze and quite a fun one to do.
Posted by Zeeple at 8:51 AM