That's a pretty good one word descriptor for my outing last night.  It was my sixth and final (maybe forever) outing with the Metro Darts Club.  My match last night was against a gentleman named Kevin who politely, and in a very friendly manner, schooled me in the ways of darts.  I did have a few moments of goodness (but not greatness) last night, but I lost the match, and I felt like a B Leaguer all night long.  There were long stretches where I felt like I couldn't buy a triple.  Anyway, here is how it went down:

I lost the match 2-3 in sets, and I lost 9-11 in legs.  My three dart average for the match was the lowest it has ever been in Metro League, at 47.5, and this brought my season average down to 50.93.  Looking at the division standings, that is actually the highest average among the entire group but I do not see how that is possible based on how I have performed in my two matches this week. In terms of good hits, I did have a couple of Ton-40's which pleases me greatly, but I only accumulated 2063 in tonnage, which is my lowest for the entire season.  I also had a couple of nice outs including a 90, and a 65.

The first set was a win for me as 3-2.  In the first leg I was sitting on 68, missed into the S20, then hit the S16 squarely, but missed the D16 outside.  Next visit I missed it outside again but then hit it with my next dart.  Leg 2 was a loss, but it was my second strongest leg of the night at 71 PPR.  I was at 175 and hit a ton to bring it down to 75, but never had another visit.  My opponent threw a command performance.  Leg three started out great with 70, 100, 100, but then turned into a shit show for me as I couldn't finish to save my life. I had 50 remaining and took a shot at bull.  Hit the 25, cracked that with a 9, and then missed the D8 outside. Then I spent the next six rounds whittling my score down to 2 and missing the doubles ring.  Happily my opponent put me out of my misery and we moved on. The fourth leg was an unspectacular, slightly anemic, win with a true struggle to finish as well.  I threw nine darts at the double ring before I finally took out the D8.  The last leg was a win.  I took out 40 but it took me five darts to do it. 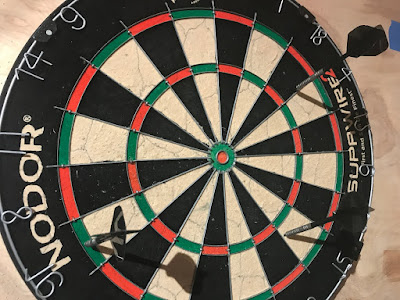 Leg five, the rubber match for the set, was an anemic mess for me and a loss.  So at this point we are tied 1-1 in sets.

Set three was a 3-0 win for me. None of the games were especially strong average-wise, but I did manage to hit my outs before my opponent in each game.  The only remarkable instance in this set was that in the second leg I took out 90, my highest out for the evening, with T20, miss outside, D15. I enjoyed that one: 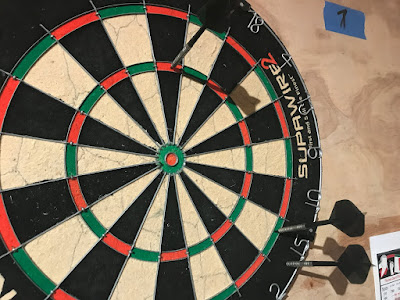 My opponent turned the tables on my in set four, handing me my ass in the form of a 0-3 set loss. And while I only had a single ton among all three legs, I wouldn't say that I lost due to anemia so much as my opponent was simply dominant during those legs.  In all three I never had a single shot at the double ring.

Set five was another loss for me at 1-3. My three losses in this match were unremarkable instances of either failing to put up big numbers or in at least once instance, having a good game but being overpowered.  Sadly, in the second loss of the match I had 40 remaining but spent three darts missing outside the D10 simply because my attention faltered. Shame on me!

Why did I lose the 11 legs I dropped?  In the final analysis, its mostly due to being out-performed by my opponent in 7 games, but there were two games in which I was straight up anemic, and two games in which my finishing suffered miserably, including one loss where my opponent gave me 19 darts at the out but I could not capitalize on it. Even in some of my wins my finishing suffered. Over all 20 legs I spent 83 darts shot at the double ring to secure only 9 successful hits.  That is over 9 darts per double hit.  However, if you remove that one outlying 19-dart fiasco, my finishing for the match was more along the lines of 7 darts spent per double hit.  This is still quite bad.  The worse part is this:  Before the match started I did a full round of doubles, and I was solid.

Metro league is good for me in many ways, but I doubt I will play it again anytime soon.  I love the one on one against a strong opponent piece because it forces me to play well and raise my game.  However, scheduling the matches is a colossal pain in the ass and equates to too much uncertainty in my weekly schedule.  I prefer to have a scheduled, reliable, "dart night" even if that means I personally play less and against a variety of players.

The darts I took were my 21 gram Steve Cootes.  I'd forgotten how sticky they get over the course of the evening.  I regretted bringing them by the third set.  I won't make that mistake again.  Of course when I go back to B League in February I'll probably go back to bringing a variety of darts.  Just because I love all my darts and I want to throw them all!
Posted by Zeeple at 9:19 AM