Same darts, next day during a Metro League match.  I was throwing well in general, but this quality shot came during the midst of some other great hitting.  It was followed up with a 140, and then a 40 out. 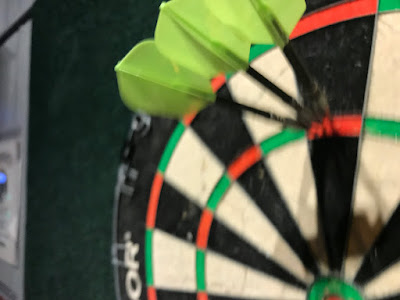 The photo is a bit blurry.  I usually feel a little guilty taking a photo during the middle of a match, partly because it cuts into the cadence of the throwing, and also if my opponent is not throwing well then I am afraid they think I am showboating.  So I just snap a quick pic and slink back to the behind-the-oche (that place needs a name. On-deck?).  Thus, in this case, blurriness.

These are the 19 gram Voks Nobus wearing #6 carbon stems and slim Fit Flight Airs.
Posted by Zeeple at 7:22 AM