Here are the few GT's I currently have.  There have been others over the years but I have traded away or sold some. 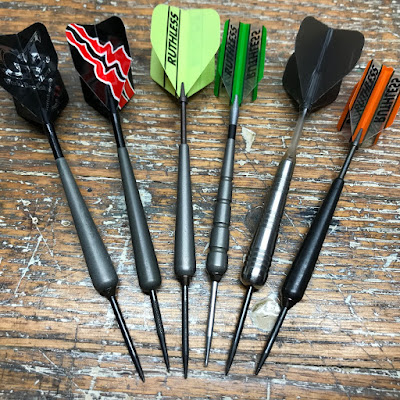 From Left to Right:

Bottelsen GT, 28 grams.  This is the first "expensive" set of darts I ever bought and they have a lot of sentimental value even if I almost never throw them anymore. I bought them brand new in 2003 (ish), and they were already threaded for the tiny 6ba stems.

Custom (Jeff Pickup) 26 gram Copper Tungsten dart modeled on the GT. I call them my "CT's". The back end takes Bottelsen's GT screw-in stems, and the point is fixed.

Bottelsen GT, 23 grams. These darts are old enough that they do not have the threading in the stem end.  I used my repointing tool to install some Voks stems that they use on their "Javalin" line of darts.  They fit almost perfectly.  They are just barely tight enough that I needed to use the repointer to get them in there.

Bottelsen Ringed GT, 23 grams. This is a special dart.  I have only rarely seen ringed GT's.  This one is old enough that there is no threading in the back end.  I have thought about refitting them with Voks stems, but I do not want to take the chance that the tungsten would crack.

Bottelsen Superalloy GT, 17 gram. I love this dart.  A bit on the fat side, and 2ba threaded, but I could throw it all day long.  I have taken it to league nights and done well with it there too.

Voks Javalin, Steel, 17 grams.  This is one of my very few non-standard material darts.  It is made from steel (as opposed to tungsten or brass) and is quite light for the size.

Others that I have had in my collection include another custom fixed-point, nickel tungsten 25 gram GT, a 27 gram Bottelsen GT3, and a 24 gram GT that was both ringed and knurled!  Sadly I no longer have any of those :(
Posted by Zeeple at 4:11 PM