The Scoundrel is an interesting dart. No longer on the market, these darts were made by Dartworld in probably the 80's or 90's and, if I guess correctly, are Dartworld's answer to the Bottelsen GT line.  I say this because the dart is an especially skinny-waisted dart, taking a stem that is smaller than 3BA, but not quite as small as the 6BA of the GT line.  While this makes it an interesting dart to have and throw, it limits your options quite a bit.  After all, there isn't a single compatible stem available for purchase anywhere, and fancier stem and flight setups like the Fit Flight system are a non-starter.

This particular model is 26 grams, but I have seen others that were 24, and with a slightly different grip design, like these, but I have no idea what the entire lineup looked like, or what the weight range was originally.  Someday I'd like to get my hands on the Dartworld catalogs from that era and have a look but until that happens, they are a mystery. 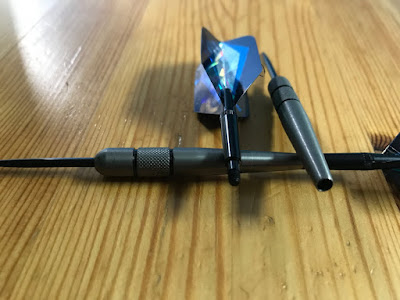 The following pic is my preferred set up for them, even really all you can really do with them is swap out the flights and put on the silver stems instead of the black ones (I prefer the black).  The flights are Target X flights which are a slightly smaller standard flight.  I am surprised they throw so well with that small of a flight despite their relatively high grammage.  I find that while my middle finger still goes where the point meets the barrel, my index and thumb are slightly more back than usual where the barrel slopes to its skinny waist, basically surrounding the bulk of the dart.  I found myself hitting doubles more than I thought I would for such a new, and different dart.  I really like how they throw.  I think I'll take them to league one night and see how they do over the course of an evening. 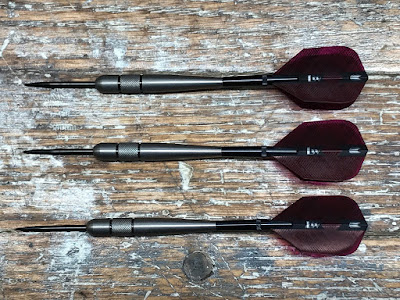 I got a pretty pristine set, complete with case and all the internals intact and no visible damage to the darts themselves.  I am sure they have been throw, but by the looks of them not very much.  I am not sure what (if anything) went in the hollow space beneath the spare stems in the case. 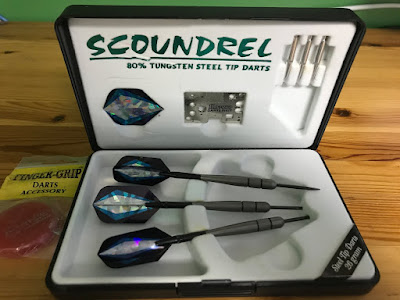