Traffic in Seattle has always been bad.  It has gotten a lot worse over the decades, but I do not remember a time that it was not very bad here.  The east side of the metro area (Bellevue) is separated from the west side of the metro area (Seattle) by a giant lake called Lake Washington with only two ways across it: the 520 floating bridge, and the I-90 floating bridge.  Traffic on them is still bad but a good ten years ago, before various improvements were made to them, traffic across these two bridges was absolutely atrocious, with I-90 being only slightly better of the two.  The funniest PNW-specific bumper sticker I have ever seen said:

Of course I saw it on a car on the 520 floating bridge. Funny not only because I-90 was nearly as bad as 520, but also because what a thing to stake your pride to!  Your pride in taking the worse of the two bridges is so strong that you bear a bumper sticker emasculating those that take the easier bridge???

Anyway.  That's kind of how I feel about number rings on dartboards.  Learn your numbers people.

But that isn't what this post is about.  I have a fairly complex map pinning system that I use on my dartboard and on the surround around it to help track where I am with my favorite practice routine: Modified Rotational Doubles.  From afar you can only barely make out the various pins: 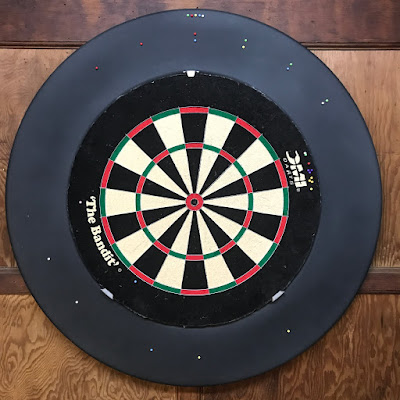 First the reason most of the pins are on the surround is because they make up my system for reminding me what the various colored pins mean, and never have to be moved.  Since I rotate my board frequently, if I had most of the static pins in the board itself I'd have to move them every time I rotated the board.  Incidentally, this is also why I ditched my number ring years (and years) ago.  I have known the numbers so long that I have ceased to actually need the ring, and moving it every time I rotated the board became tedious.  Also, the logos are a distraction.  When I get into the dartboard business, I will create a quality bladed board that has no branding on the front of the board, and any branding I do will be on the backside, or the round edge of the board.

Anyway, this system I have is designed such that I can walk away from a practice session at any point and come back later, even weeks later, and know exactly where I left off.  The different colored pins map out the process of working through a 5-Circuit Modified Rotational Doubles.  I have no idea how long it would take to do the full five circuits because this is a practice routine that I do in bits and pieces.  It can stretch on for weeks.


The static pins placed in the surround serve as reminders for the sequence.  Not just the sequence of doubles within the various circuits, but the sequence of the circuits themselves.  At the very top of the surround I have one pin of each of these five colors: green, red, yellow, blue, white. These five pins tell me the order I go through the various circuits of doubles.  Once I am done with the Green Circuit (going around the board clockwise) then I progress to the Red Circuit (going around the board counterclockwise). 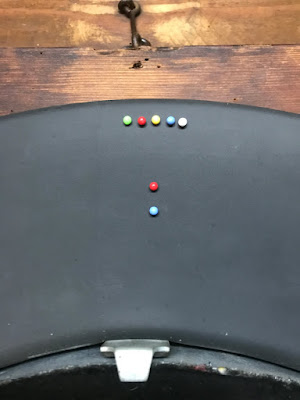 Then, perhaps more importantly, I have three of each of the five colors positioned outside various doubles, and these are always the first three doubles of the circuit.  So for example: 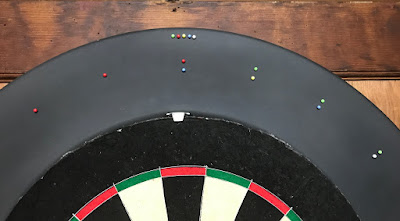 Knowing the first three numbers in any given sequence is enough to tell me what the entire sequence is.  1, 18, 4, ... logically means I progress around the board clockwise, for example.  The only color which is non-obvious based on the first three is the White Circuit.  It is obvious to me because I know that sequence backwards and forwards, after all, I have been throwing that sequence for years in doubles practice. But it at least tells me that it is the potency sequence, even if the sequence of the doubles within it must come from my memory (or this blog, haha).

The pins in the dartboard itself all move from turn to turn or from circuit to circuit.  The pink pin, for example, is only moved between circuits because MRD calls for aiming the first dart at either the bull or the treble 20 for the entirety of the circuit.  The pink pin is placed under the 'B' (in Bandit) if I am aiming for the Bull that circuit, or it is placed under the 'T' (in The) if I am aiming for the triple 20 during that circuit.  So while it does not move frequently, it does move. 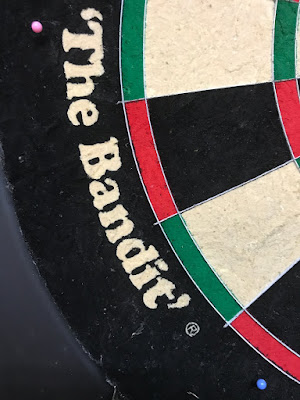 The cluster of pins behind the DMI logo are all the pins that are waiting for their turn.  The only pin going from double to double around the board during the MRD practice session is one of the five circuit colors (red, green, yellow, blue, or white), and it gets placed by the double which I am aiming at that turn.  If I hit it, I move the pin to the next double in the sequence.  The exception is the three orange pins and the three purple pins which I use during a completely different doubles (or triples) practice routine.  With them, essentially I use 20-sided dice to determine three random numbers and the pins either go in the doubles (the orange pins) or the triples (the purple pins) of those numbers. 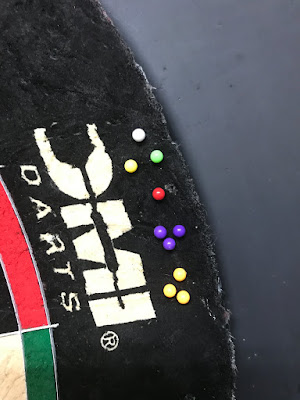