An absolutely sweet little dart.  This is a 19 gram version of Accudart's steel tip Cricket line.  I love these little darts.  I have been using them a lot lately and I am looking forwards to trying them out in a competitive scenario.  It feels like forever since I have played a match against anyone!  I have been experimenting with the best stem and flight combo for them as well.  In the first photo below you can see I have settled on #6 Fit Flight Carbon stems and Shape Fit Flight Airs.  I also put in some black Volute points when I am quite taking a liking to. 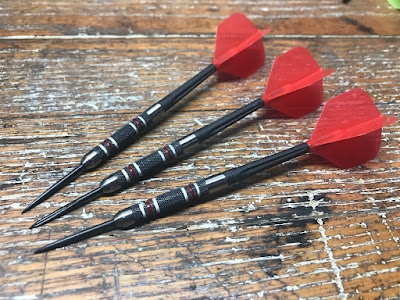 The knurl is quite grippy.  Some knurls are smooth and even slippy (like the Harrows Boxers) but the knurl on these darts have bite, which is nice. 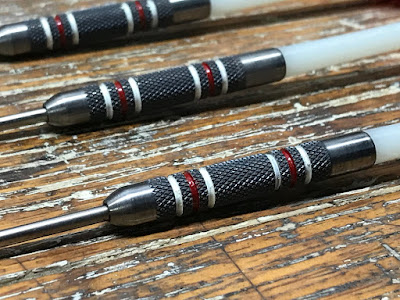 I am not sure how I feel about the trend towards clamshell packaging for darts.  It seems to cheapen the product some in my opinion, but it is not only Accudart doing this.  All the dart makers are utilizing clamshelling for at least some of their product lines these days.  I have seen it with Bottelsen and with Unicorn (I think) and others.  I guess the idea is that they want to sell their stuff in big box stores where they would be hanging on hooks (thus the hook-hole at top).  I have to admit, in my early days of this hobby I spent a lot of time staring at the various Halex darts hanging in their clam shells in Fred Meyers and other places that sell low end sporting equipments.  It wasn't until I was thoroughly hooked that I started perusing the high end sets on websites. 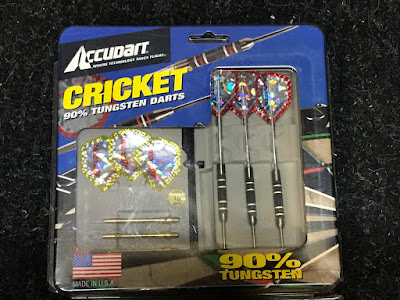 I notice in the picture that you can see on the back of the clamshell packaging that there is a Cricket dart with a more conical nose and a different striping pattern.  I am guessing that Accudart made several darts in this line in different weights and styles.  I'd love to see them all but it is hard to find their old catalogs online anywhere and since they stopped making this dart information is simply impossible to find on it. 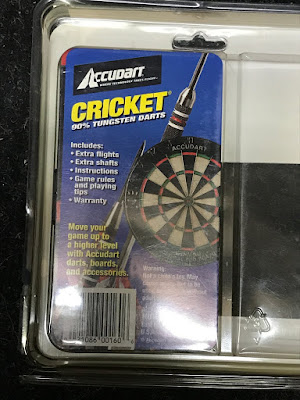 On the whole, this is a terrific dart, one which I will continue to throw in practice and in competition.  As they are currently dressed, they are wearing medium length Twin-Grip nylon stems and slim poly flights.  I had them dressed as such originally so that flights would match the color scheme of the darts but as I have become highly enamored of the Fit Flight system I will probably get some #6 carbon stems and some red slim Fit Flight Airs to go with them.
Posted by Zeeple at 8:00 AM

are you still using them ?

No not really, but I really leaned on them for a while. I break them out from time to time for a game but not often. I still really like them tho.