A Happy Ending for an Unhappy Dart

Back in the early days of my darting life, in the early aught's, as they are called, there were fewer online options for darts, fewer companies selling them (I think) and darts were a hell of a lot less, well, blingy.  But even in those days there were the highly regarded "expensive" darts that everyone more or less fantasized about having.  For us, those were the Bottelsen GT Hammerhead, the Laserdarts Black Widows, and the Laserdarts Black Eagles.  All were in the neighborhood of about $150 at the time, if I recall correctly.

Years passed, and then one night a teammate shows up to league sporting a set of Black Eagles.  I was impressed and envious at the same time.  After the match was over he let me throw them some and wouldn't you know it, I couldn't miss.  I didn't hit a Ton-80 or anything, but I do know I hit mostly anything I aimed at.  In fact, my memory may be a bit hazy on this but I am about 80% certain that my very first dart was aimed at, and hit, the inner bull.

I bought a set the very next day.

Years more passed.  The Black Eagles served me well for quite a long time but eventually my finicky dart preferences moved on to other sets in my collection and the Eagles got shelved. But then more or less on a whim, in October 2019, I break them out again and take them to Monday Night league where two things happen:  I hit a Ton-80 with them, and then later in the evening, one bounces out, hits the floor, and the stem snaps off right at the barrel, leaving the threaded portion inside and nothing to grip to turn it out.

This is not an uncommon occurrence.  Stem breakage is a fact of life for the darts aficionado, and we all (most of us anyway) carry a tiny tool called a stem extractor to remove those pesky broken stems from threaded darts, like this one:

I've never had it not work before when needed, so I was surprised this time when it couldn't even gain purchase in the broken stem.  It was like trying to dig into hard glass or something.  So I reverted to a few other ideas that I have known about but never really had to use.  My next attempt at extracting the stem was to superheat a tiny screwdriver and insert it into the stem, let it cool and then unscrew the stem like any regular screw.

No love.  All I accomplished with that tiny screwdriver was to chew up the middle of the stuck stem.  The stem itself refused to budge.  So my next move was to  go online for advice, and the good folks over at Dartsnutz.net had plenty of suggestions, including this: 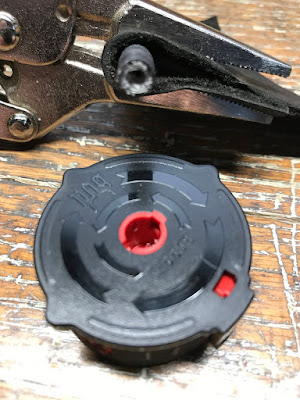 The L-Style Bull Extractor.  I bought one and tried it, but while I do not doubt that it is a fine stem extractor (after all, it is highly lauded), it did not work in my case.  In fact, it basically hollowed out the stem as you can see in the photo above, and that left me with a quandary.  So then I thought, "okay, what I need is a screwdriver that is the exact width, minus maybe a hair, of the inside of the dart's stem hole.  I did my best to measure it and it seemed to be about 4 mm.  I sought out my computer repair screwdriver kit and found a 3.5 mm and 4 mm.  The 4 mm was too tight a fit so I super-heated the 3.5 mm wide one, rammed it into the broken stem, let it cool and gave it a turn.  But again, no spinning, just more disintegration. 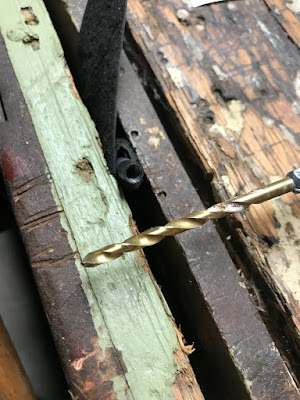 The bit seemed to fit in there almost perfectly, but I eased the drilling as much as I could be cause I was very worried about permanently ruining the threads of the dart.  After all, the darts are not just expensive, but at this point carry sentimental value for me as well.  It seemed to work though, and got out all of the material except for the plastic that was still in between the threads.

So I went online and bought a 2BA Taper Tap, and a Tap Wrench: 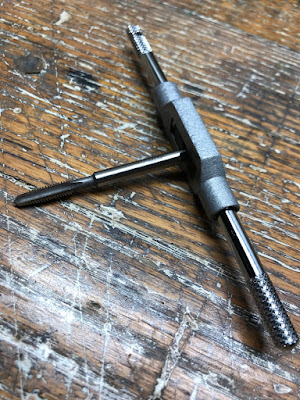 This set up is what I used to clean out the remaining plastic material. I honestly do not know why I have never bought one of these before, given my love of darts as a hobby.  You'd think I would have by now but I guess I never really needed one before this incident. 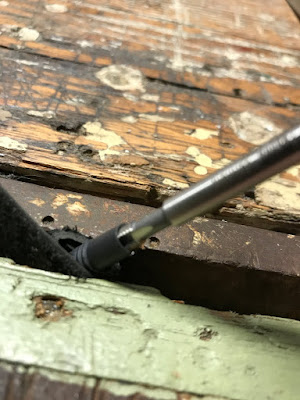 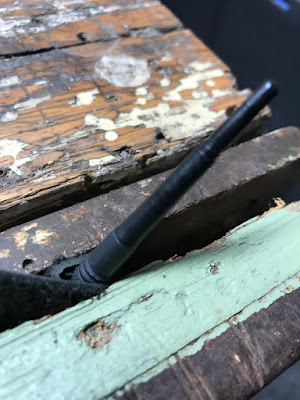 The happy ending is of course that the Black Eagles came with me to Wednesday night league for the last match of the season and I won all but one of my games; scored a Hat Trick to win a Cricket game in spectacular fashion; and in general performed well.

The other happy ending here has to do with Cosmo, the maker of the stem that was broken off inside my dart.  Cosmo makes the Fit Flight line of stems and flights which I happen to be a big fan of. The fact that it was a Fit Flight stem broken off inside the barrel is immaterial (see what I did there?) because really any stem can snap off the way this one did.  The stem I was using may have been a tad more fragile for various reasons, but it is certainly not Cosmo's fault.  After all the stem was purchased at least 4 or 5 years ago so that could contribute. But also it was a mostly transparent stem, or at least translucent.  The reason this is relevant is because of the material needed to make a transparent stem.  A rep from Cosmo Europe hopped on the thread where this was being discussed and offered some insight into the change in materials (normal nylon cannot be made transparent).

Then, in an act of terrific generosity, sent me a replacement set of stems!  But not just any stems.  He sent me their new titanium stems which retail for about $85.  And this was despite my acknowledgment on the forum that Cosmo was in no way at fault for the random stem break!

I am very happy with Cosmo darts, and especially the rep from Europe who not only participates on dart forums but also engages in a friendly and generous manner with customers.

So there you go.