I have tried many practice routines, even recently, and I seem to always come back to this one as my favorite.  I call it "Modified Doubles" because it is mostly a way to practice doubles, but it includes 60's practice as well.  It goes like this.

The first dart of every round is thrown at the 60 segment.  If you hit it, you stay on it, hoping for a ton-80 but being happy with any high ton.  So even if you hit a single one with the next dart, you still aim at the 60 because you could still hit a 121.  Basically, hitting the triple 20 with your first dart earns you the right to stay on them for the entire round.

If you miss the 60 with the first dart then you work on the doubles with the other two darts.  I mark the double with a map pin so that I can remember which double I am working on between sessions.  This is important because I treat this like a never-ending game coming back to it session after session picking up where I left off.  When working on the doubles I basically adhere to two different rules:  stay on the double until you hit it, and only then move on, and work through the doubles in the following order:


Last night's session was a good one.  I hit several 140's and did well on the doubles, at one point hitting the Doubles Trick pictured below. (A Doubles Trick is hitting three different doubles which were specifically aimed at (no slop, in other words)). 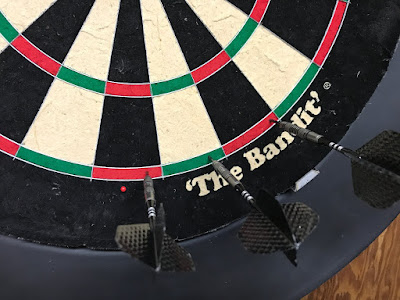 An astute reader will note, however, that a Doubles Trick should not be possible in this practice routine.  Why?  Because as stated previously, the first dart is always aimed at the 60.  So how did I hit one this time?  Because I fucked up and forgot to throw at the triple 20!  That's okay.  Ain't no one perfect.  you can also see in the photo how I use a map pin to mark what double I am supposed to be aiming at.  In the shot pictured, I was working my way through the doubles counterclockwise, and was on the double three.  I hit it, then proceeded to hit the double 17 and the double two in succession, making the Doubles Trick.

As almost two-thirds of the darts are thrown at the double ring this is mostly a doubles practice routine.  It tosses in 60's as an element but guards against target fatigue by always moving on to doubles when you miss the 60, and staying on the 60's when you do not.  So this is the basic routine.  What are the variations?

Rotational Modified Doubles is when you do this same routine but you rotate through multiple sets of darts while you are doing it.  Since I have so many sets, and I quite like all of them, I tend to throw more Rotational Modified Doubles than anything.  What triggers a change of darts?  This is certainly up to the thrower, but for me it occurs when I hit a Triple-20, even if I have not hit any doubles with that particular set of darts.  This is because I value the 60 so highly, probably, and I have so little success with it (in the grand scheme of things).  I almost always rotate through tens of sets, if not my entire collection, and sometimes I randomize the sets I use using my slew of multi-faceted dice.  Sometimes I pull down just three sets and use those the entire session, especially if I think those are the ones I'll be using in league.

Bonus Rounds is another variation I almost always use and it means that if I hit a double with a set of darts, I am entitled to spend the entire next round aiming at the Triple-20, even if I do not hit it with my first dart.  This variation only applies to when I am rotating as it helps to keep the rotation moving. Otherwise there is the risk I'll stagnate on a single set of darts if I am hot on the doubles but cold on the 60's.  For every double I hit without hitting a 60 adds another bonus round, cumulatively, up to three bonus rounds (never more).  So if I have hit two doubles with a set of darts I have two (back to back) bonus rounds at the Triple-20.  If I have hit three doubles then I get three, back to back to back rounds at the Triple-20.  If I hit the 60 early then the bonus rounds are aborted and I rotate to a different set of darts.

Flipping is another variation I use but it only applies to Rotational Modified Doubles and Bonus Rounds.  Essentially, it means that if I have hit a fourth double without ever having hit the Triple-20, then I "flip" the ratio of 60's to doubles.  It works like this:  if I hit a fourth double with a set of darts and I do not hit a Triple-20 during my three bonus rounds, then from that point forward I throw my first two darts each round at the 60 and only the last dart at the double ring.  It is yet another variation specifically contrived to help the rotation of darts sets rotating.

Bulls is another variation I use and the idea is simply that instead of practicing 60's with the doubles, I practice Bulls with the doubles.  So the first dart of every round would be at the inner bull, staying on the bull if I hit the red eye, moving on to doubles if I do not.  The reason I require an inner bull to "stay on the bulls" is because the bull is a much bigger target than the Triple-20, and I am better at hitting it (more confident, in other words).  Thus if any bull counted then I would be spending too much time throwing bulls and too little time throwing doubles.  All other rules apply to this variation, including Bonus Rounds and Flipping, etc.

On Optimized Order:  previously I mentioned that I have a special "optimized order" that I sometimes do the doubles in.  The order is:


On Map Pins:  Map pin are an extremely valuable and quite simple tool for the darts practicer.  I use them constantly, and in many different ways.  The way I use them with this practice routine is that I use a different color pin for each of the five different doubles orders, as such:


In so doing, I can com back to the routine after a several day hiatus and know where I left off.  Anyway.  That's my favorite practice routine.  I hope you enjoy it.
Posted by Zeeple at 8:11 AM

I saw that you posted this on Reddit and it looks like a great routine to introduce to my own practice sessions. I just have a few questions to make sure I understand what to do correctly!

Do you keep throwing at the T20 (assuming you hit with your first dart) until you miss and then move on to the doubles? For example, T20, T20, S20 and then another three darts at T20, until you miss with the first dart?

When you hit your first chosen double, do you then go back to T20 and repeat the process?

Hi there, thanks for the question! Let me see if I can clarify a bit.

The scenario you describe is correct in that if you hit the 20's with all three darts in one turn you still throw at the Triple 20 in the next turn, but not because of anything that happened in the previous turn. Every turn is a brand new, clean slate, independent of anything that happened previously. So you keep throwing at the Trip 20 next turn simply because the first dart of every turn is spent on the T20. If you miss the T20, you go to the double ring and continue where you left off with doubles. If you hit the T20 with your first dart, you try for a high score that round staying on the 20's no matter what you hit.

But next round is a brand new round. Spend one dart on the T20, and if you hit it, great! Try for another big score. Otherwise, back to the double ring. As an example, here are a few typical rounds:

You get the idea, I hope. I love this routine. I do it almost every day. By the way, consider using thumbtacks or map pins to keep track of which double you are on so you can come back to the board and pick up where you left off.

Got it, thanks for the clarification!

I've already started a session using my understanding of the routine and love it, but this makes even more sense and is well worth a restart.

I do like something you can walk away from and start up again 30 minutes, 2 hours, later in the evening and just pick up from where you left. I have an injury so can't stand at the oche for long periods, so this is ideal!!

I am sorry about your injury, but I am very happy you like the routine! If you discover some possible improvements to it, please feel free to share!!