Last night was my first match in the Metro Darts Club Qualifier League.  Where to begin?

First I must say that I like it a lot better than Team League in a few ways and less than Team League in a few ways too.  In fact I think it felt a lot more like an A League match than anything as it was just me against one other guy and the competition was strong.  In fact, what I like most about it is the fact that I am the source of my own victories and losses, and I do not have a partner or a team garnering any for me. One on one. The evening is more focused, and we never have to wait for a board during the match so the evening goes a lot faster.  We started at 6:38 and ended at 8:58 making it a 2 hours and 20 minutes match.

Whats missing though is the team camaraderie.  You feel a little bit alone.

Last night was a loss.  I played against Keith, who as it turns out, is a great shot, and one of the better Cricket players in B League.  I don't recall him ever beating me in regular league but he did last night, just barely.  Even though I lost the match 3-2, I feel I threw some great darts last night, and in a few ways I actually out-performed my opponent.  Alas, his finishing was slightly, slightly, better earning him the match win.

At the highest level it was a match loss for me at 2-3.  At the game level it was also a loss at 10-11. When you look at it that way, and you look at how many games were close in score, and look at how closely we matched each other in other categories, it would seem that Keith and I were quite evenly matched.  Based on our B League standings, tho, I think Keith was playing above his normal game while I was playing at, or slightly below my normal game.

It might be a bit tedious to go through and analyze each of the 21 games we played, but at least here is an analysis of why I lost the games I lost:

The second set I lost 1-3. The first loss was due to missing the D12 when I had my shot at it. I hit the D9 leaving 6 and missed that with my last dart.  I never had another chance. The second game he was 200 points ahead of me early on but when I caught up I missed a shot at 60-out leaving 14 but did not have another shot at it. In the third loss of the second set I had 40 left when he still had 133 but I missed inside twice leaving 10, then missed it with all three darts, then cut it down to 4. While my finishing was suffering in this manner he caught up and won.

The fourth set I lost 2-3.  The first two losses I never made it to an out.  I still had 206 left in the first loss, then in the second I hit a ton to reduce my score to 124 before he won. In neither game did I ever through at the double ring. The third loss was a case of suffering finishing.  I had 46, hit the fat 6 to leave 40 and missed high with the last two darts, then somehow, and I don't even remember how, I score 17 to leave 23 and then he won next visit.

I will say this for my opponent: he did not allow my finishing to suffer.  I had very few shots at the double ring on the games I lost.  His finishing was usually pretty spot on.  However, looking at my losses, I will say that 7 of the 10 were losses because I could not finish.  I kept up in tonnage, mostly, but not with finishing.

My go to darts last night were these two sets: 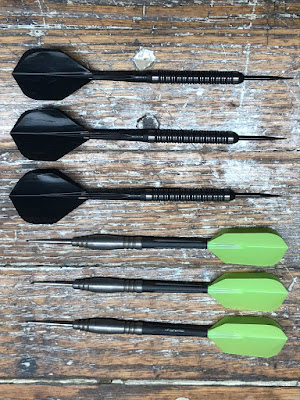 My 19 gram Nobu's wearing size 6 carbon Fit Flight stems and slim Fit Flight Air flights.  This was a nice set up and the darts flew pretty well for me last night.  The other set was 24 gram Designa Dark Thunder wearing medium length standard Condor onesies.  Next week I am thinking of trying a single match set with a more outlandish correction set.  Maybe the Jenkins wearing the same stem and flight combo that the Nobu's were wearing tonight, and a fat Nickel-Silver set?