I am not yaying because we lost, but rather because I was in a position to either win or lose at all.  Last night was the first league match that I have played in about five years and it was a blast. I loved being on the oche again, "chalking" (they've gone chalk-less in my absence), and the general camaraderie of the night.

We played against the Vagiants at Kate's. Both teams play out of there as our sponsoring bar, but we were the official "visiting" team and got to choose cork all night. They walloped us 8-13 but fun and merriment was had by all, so who cares?

My performance, personally, was more good than bad, I think, but I have loads of room for improvement. I hit too many low scores for my taste and ended up with an 01 five dart average just over 55.  I played three singles matches and five doubles matches, and of course participated in the team game of SIDO 801.  I dropped one of the singles matches (I should not have) and one of the doubles matches (again) but won the rest.  I did not hit any 180's but I did hit one high-ton, and two low-tons for 376 glory points on the night.  I also hit a nice 7 mark round in cricket. 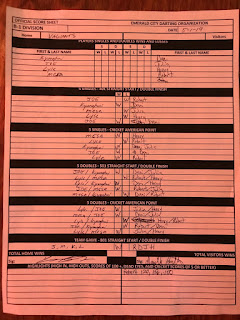 My first 401 was against Joe. In that game I shot a 120, and took out 40 with my first dart at it for the win.  My second singles game was cricket against Lyle, their captain and best player.  I also won this one.  He was behind for most of the match especially after I hit a 7 count on the 17's and 15's, so he opened bulls early.  But next round after he opened them I closed them right up with two double bulls.  My last singles match was against Lyle in cricket again and he won.  All of a sudden I could not hit bulls when I needed to and dropped that one.

I played three doubles SIDO 501 games, and two doubles cricket games.  In the first 501 I took out 4 for the win, but in the second I missed an 83 out.  I hit my triple 17, slopped quite sloppily into the single 16, and then missed the double 8.  They took it out the next round.  That 83 was my one opportunity to win the game and I choked.  In the last doubles 501 I hit a 156 mid-game, and then later took out 40 for the win, again with my first look at it.

The first doubles cricket I played with Henry.  It was an unremarkable game but we won.  The second doubles cricket game was also a win but I hit only rubbish.  My partner tho had a hell of a game.  She hit a 9 count, as well as a first dart double bull for the win.  Team game was a loss.  Other than a single ton I didn't put up any numbers.  I think the team was spent by then. 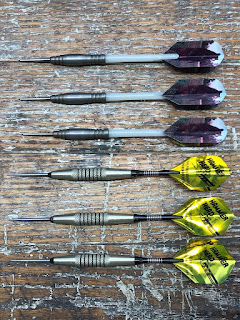 I went into the night thinking the the Nobu's (top set (medium twin-grip stems with slim poly flights)) would be the primary set and I would switch to the UFO's (bottom set (short aluminum stem with standard mylar (folded) flights)) late in the match, maybe for the team game.  However, after my first cricket loss I ended up switching between the sets pretty regularly throughout the night.

Next week we travel to Redmond for a match against the Three Lions Fight Club B team. Looking forward to it!
Posted by Zeeple at 3:32 PM