Match 3 Held a Max and a Win

League was wonderful last night, like with a Capital-F.  Not only did my team win its first match all season long, but we won it in the most spectacular fashion possible:  my captain, quite a darting competitor, stepped to the oche in the Team 801 game with 118 left.  She proceeds to hit: Triple 20, Double 4, Double Bull for the out and the win, not only of the game, but that was the deciding game in the match.  We won the night 11-10, and I can tell you that victory tasted sweet on the palettes of an otherwise winless team :) 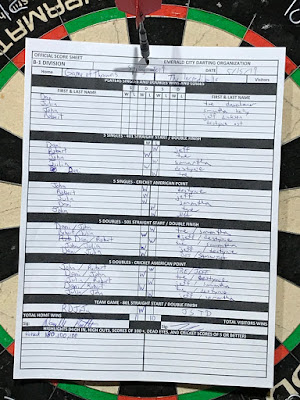 My night got off to a smashing start.  I played a warm up game against my captain before the match started of DIDO 301 and she was down to 48 before I ever got on, but I was able to drop the score quickly and take out 16.  That gave me enough confidence to carry me into the match, and I must say, if I'd never got on in that game, I might have been bothered come match time. Might have.

I played two singles matches in the night, winning both, a SIDO 401 and a Cricket.  I also played 5 doubles games: 2 SIDO 501 (a win and a loss), and 3 Cricket (2 losses and a win). Over all I won more than I lost, but I think my performance was mostly lackluster with two notable exceptions.

My first 401 was against their Captain, and while I hit my 45th lifetime ton-80 early in the game, it took me 18 darts to get the score down to 30, and then 27 fucking darts to reduce that 30 to an out of double-2.  That includes an embarrassing 4 busts in a row with 13 remaining (which I think all were single 5, single 18 for the bust).  But I won.  I call this an A-to-C game because in the space of one game I go from A League caliber play to C League caliber play.

My singles Cricket match was a win, but it was an unspectacular B League effort for both of us. No nice rounds for either of us.

My first doubles 501 was a nice win with Julia, but it was unremarkable.  My second 501 with Dani was a loss on the other hand but yielded back to back 100's for me.

Doubles Cricket was a mess.  My first game was a loss with John and it was a combination of them playing well, and us not hitting anything we aimed at (for the most part).  The second loss was with Julia, and pretty much the same story.  It is worth noting that their best player, Jeff, schooled us in both games.  He is a mighty fine shot.

My one Doubles Cricket win was with Dani, and while we outshot the other team, there were no spectacular rounds for anyone in that game.

The team game was a win, and storied.  Dani took out 118 for the game win and the match win as mentioned above.  I hit nothing remarkable in that game.