Historically I have always brought two sets of darts, at least, to a league match because if I felt like I wasn't throwing one well, I would haul out the other set and throw it for a while.  A system that has always worked well enough for me, being a B+ average player for most of my darting life.  The problem of course is that all the experts say to not do that.  And furthermore, it feeds into the notion that it is the brush, not the artist, and that there really is music inside a piano.

This week I went to league, as far as I know for the first time ever, with but a single set of darts.  My Nobu's.  My performance was mediocre, but the temptation was not there to go to a different set of darts and I guess I did well enough.  On thing I do very much like about bringing one set with me, and what's more, bringing just the Nobu's is that I can fit everything I need into a small container: 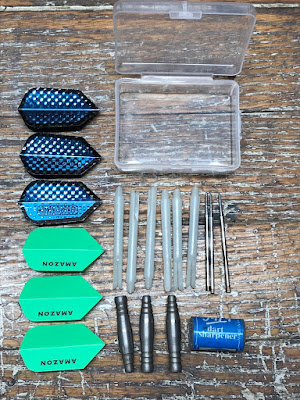 The container originally held small round-end thumb tacks, but it happens to be a smidgen longer than a medium length Twin Grip stem and the Nobu El-C points.  The container fits a sharpener and the barrels with ample room to spare.  I also cut up an old clamshell for some other random product into a couple of slim flight sleeves and two of those also fit into the little box. 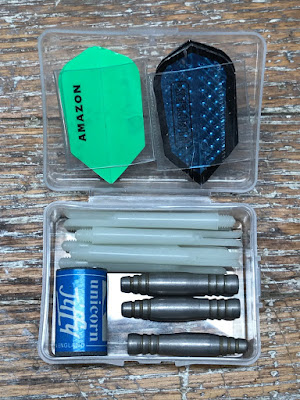 The only problem is that there was still too much room left over.  So I cut up a little bit of foam and placed it into the bottom of the box and now the contents do not rattle.  I like my little dart kit, but I think it could be slimmer.  I will eventually replace the round Unicorn sharpener with a slimmer fish hook sharpener, and maybe ditch two of the three spare stems and try to find a small container to fit it all. 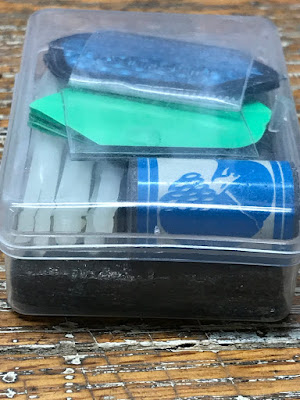