I have read this one before, a long time ago, when first getting into darts.  I don't remember if I got a lot out of it at the time, but having reread it recently I decided to jot a few things down.  The book is short, like 120+ pages with lots of pictures.  Nothing in it is overly complex, it unquestionably aimed at the novice player, and can be read in the space of an hour and a half, tops. 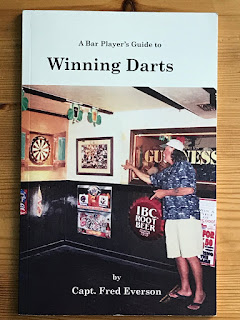 Interesting (to me) tidbits:

The author's home bar is the Fox and Hounds Irish Pub in Brandon, Florida.  Just outside of Tampa, I could easily swing by it on the way to a relative's house next time I am in Florida.

I always wondered why old wooden darts were called "Widdies".  As it turns out, they are called such because there is a company in Philadelphia called the Widdy Dart Board Company.  I guess only some of the old wooden darts are properly called Widdies!  Some day I will visit to them and ask for a tour.

The author quips that "you cannot outspend your opponent to gain victory" which is deliciously true.  I love it that a guy shooting $300 designer darts from Japan, supplemented with every conceivable technology built into the dart, can be bested by a person shooting a $3 set of brass darts. You absolutely cannot buy an edge in this game.

The author does what I have always done:  brings two sets of darts with him when he goes out to play (presumably in tournaments and league nights).  I have always done this, usually alternating between the sets throughout the night but I am going to stop this practice.

At one point he states that only the barrel matters.  As long as your barrel fits how you hold the dart and is the weight you are most comfortable with, everything else is "fluff".  I disagree.  Darts have to be properly and carefully configured.  The size of the flight matters and so does the length of the stem.  Misconfigure a dart and even the most perfectest barrel will not fly right for you.

Through league play he learned the same hard lesson I learned: carry chalk and dry erase markers with you to league night.  The bars WILL NOT FUCKING HAVE THEM.  Sadly though, in the Seattle league we have moved to an electronic (cloud based) scoring system.  It has its conveniences, of course, but is an extraordinary departure from darts tradition.

The author superglues his flights to his nylon stems.  I was blown away when I read that, but he has vision issues so it is understandable.

He states that when your darts land in the board they should end up angled up slightly.  I disagree.  They should be completely perpendicular to the board and not angled in any direction.  They should hopefully be mostly invisible to you when you are aiming your next dart.

One thing he says that I like a lot, and which I think I have mostly failed to do in my time as a dart player is that, in practice, a player should endeavor to cultivate the best ratio of speed to accuracy he can.  In other words, your darts should be delivered strongly and quickly to the board, while not sacrificing accuracy.  I know I don't through hard enough.  I need to be less weak-wristed in my throwing and cultivate a strong delivery.  I have actually been working on that lately but it is hard after so many years to change your throw.  But I am convinced that is the next step in the improvement.  According to the author, this will more likely than not involve cultivating a "snap" at the end of your delivery, and it is this snapping of the dart the provides the speed to board.  An old workmate of mine has this naturally and he is a good player.

He also states that there are no bad numbers on a dart board.  Depending on the game this is absolutely true.  In Cricket however, most of the numbers are not used, and in any 01 game, every single is important (usually while setting up out shots) and every double is important (you never know where you will have to go out), but I seriously cannot think of a use for some of the triples. When would you ever need to throw a triple three, for example?

When it comes to discussing the most common games, 01 and Cricket, I find aggravation and also delight.

He also asserts, not once but on four separate occasions, that to win Cricket, in addition to having closed all the Cricket categories, you must have more points than your opponent.  This is false.  You may consider this quibbling on semantics but I consider that statement to be not only inaccurate, but potentially misleading to a new player.  In reality, to win a game of Cricket, you must have closed all of the cricket numbers, and not have fewer points than your opponent.  That's right.  You can have the exact same number of points as your opponent, and still win, so long as you have closed your numbers and he has not.  He is not the only author to commit this error.  Many have, and it is frustrating and aggravating every time I see it.

Another quibble I will make is on terminology.  He refers to the act of hitting all three of the required hits in a bed and then still being able to score on them as "closing" the bed.  I believe this is also inaccurate terminology.  If you hit your three marks on a bed and your opponent has not, I believe this is more correctly referred to as "opening" that bed.  As in, the bed is open for scoring until your opponent closes it.  once both players have hit their three marks in a bed, only then may it be referred to accurately as "closed".  It is worth noting that while I am not the only one who believes this, not everyone agrees.  Wikipedia does, however :)

The author also shows an incorrectly written Cricket scoreboard.  He shows the score of '18' written next to the 18 bed on the score board instead of the top of the scoring column where it should be.  This is misleading for a couple reasons.  First, it make it seem that extra scores in a bed are to be written next to the bed.  This is not the case.  Points should be tallied in a score column.  Second, it does not make it clear that points are totaled as you go in the game not tallied in the end.  For example, a newbie player might look at that picture and wonder "So, if I get an extra 15, do I write '15' next to the 15 bed?  Or add it to the 18 and write it somewhere else?"

The book introduces, to my utter delight, a variation on cricket that I had not seen before called "Texas Cricket" in which you include Doubles, Triples, and "Colors".  The doubles and triples means that you need to hit three of each to open or close that category, and "Colors" means that you need, in one round, to plant your three darts into three different colored beds.  I think this is interesting because it requires hitting a triple or a double to get at least one of the colors.  If you only need to hit three of the same color you could aim at the fat singles and get it easily.

I also like it that the author covers Cutthroat Cricket, as most books do not.  It is an excellent barroom variation for when you have three people and wanna play darts.  Essentially, you give points away instead of keeping them, and lowest score wins.  In a similar vein, he also provides the best description the American Dart Game that I have ever seen in a book.  Usually the focus is exclusively on the British game.

He says "Abel slew Cain again."  Pretty sure it is the other way around, bro.

I love the darts ladder idea.  If I were in pubs more, or if I had my own place, I would totally set one up.

Love the other games section, as always.  Here are the new ones I have not seen in other books (yet):

Golf
I have heard of Golf being played before but I have never seen the rules written out explicitly.  I am sure I have played a number of barroom variations but it is uncommon enough that I do not remember what they are.  Here is this book's version:  Any number of players can play, three darts per turn.  9 holes uses numbers 1 through 9 in order, and 18 holes uses the numbers 1 through 18, in order.  Lowest score wins, and you earn strokes in this manner:  Triple = 1, Double  = 2, Narrow Single = 3, Wide Single = 4, total miss = 5.  Only the most recently thrown dart counts.  So if you throw a triple with your first dart, stop there!

Double Down
Very similar to Halve It from the Little Red Darts Book.  The differences are that in this game you start with a gratuitous 40 points, and that the order of the targets is set and non negotiable: 20, 19, any double, 18, 17, any triple, 16, 15, Bull.  As with Halve It, a miss halves your score, rounding down, and you do not get eliminated by hitting 0.  Highest score wins.

Shang-Hai
Very similar to the game of the same name in the Little Red Book, with the differences being:

Other than that the game is identical.

Killer
The book offers two varieties of Killer.  one which is exactly like the one offered up in The Little Red Book, and another which is quite interesting.  Any number of players, three darts per turn.  The first person to throw established the first standard, which is whatever he threw.  Whoever follows that person must better the standard or they have busted.  Bust three times and you are out of the game.  Last man standing wins, there is no high score in this game.  Once there is a bust, the person to follow sets a new standard, and the game proceeds as such until all but one player has busted three times.

English Cricket
This is what the Little Red Book called 'Cricket' and what I know as 'Wickets and Bats'.  The only different between this book's description of the game and that in the Little Red Book is that this books calls for 9 wickets before the players switch up, and not 10.  This book also calls for scoring to be whatever remains after 40 is subtracted, whereas the other book did not.

Small Sixes
Like basketball's 'Horse', but for darts! The game doesn't really start until one player hits the narrow single six wedge with either his first or second dart.  Once that happens, with the remaining dart(s) the player will shoot for something which will become the target. Throwing the third dart is not mandatory if the player hits something good with the first dart (like an inner bull!). Once the target is established, it remains the target until it is hit again.  Any player who doesn't hit it loses one of their three lives.  The player who does hit it must establish a new target with any remaining darts.  The game proceeds as such until last man standing.  Sounds like a fun game.

That's it!  One last thing the author says is that he is baffled that darts is not more popular.  I agree.  Seems like we would have an American televised league by now.