Book: How to Play Darts

This book is quite the gem.  At first blush it would seem that the book is somewhat outdated as it opens with a discussion of equipment that is no longer in vogue or is simply impossible to find and then proceeds to describe the "hockey" as 8 foot removed from the board.

The book itself is quite small.  It is the height and width of a regular paperback book, more or less, and is only 64 pages.  It seems larger in the hand because the pages are a thick paper, and though paperback, has a sleeve for the cover. 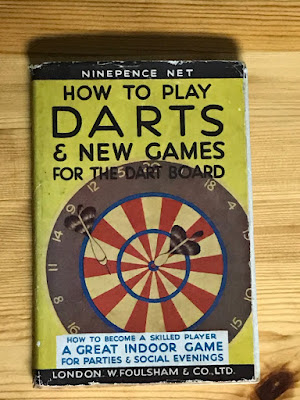 The book quickly had the collector in me salivating.  It describes the dartboard scene as something that is highly regional, with dartboard makers all over the countryside, supplying handmade dartboards to pubs in exchange for drink, and what's more, each regions dartboard was potentially different to varying degrees.  Someday I would like to take a 2 month vacation to England during their garage sale season (if in fact the have such a thing) and just scour the countryside for old darts equipments! 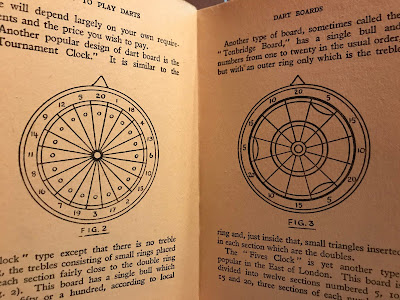 Take a look at the above pic.  On the left there is a board I have only ever even seen described in this book.  Trebles that consist of small rings within the number bed?  Fascinating!  And on the right you see a typical "Fives" board, but this one is drawn with some extra weird little rounded space carved out of the 5 bed, which I have never seen before (and I have seen many Fives boards) and which the author does not describe.  Also of note.  Already in 1937 some boards were being made paper-wound and these drawing suggest that perhaps the boards that served as models for these pages were paper boards themselves.  How do I know?  Because I have never seen a bristle board with a triangle shaped wire hanger at top!

I am also delighted to read that as of the writing of this book (1937) there were already "an infinite number of patterns of brass darts".  The earliest catalog in the Unicorn Books of Darts page is from 1950, and in those catalogs you can see that Unicorn was quite imaginative and from its very earliest days, and I think that this book validates that.  Still, I'd love to see pictures of the following darts mentioned in the book:   "Treble Ring, Plain Ringed, Long Barrel, Octagon, Hexagon, Three Threes, Match, Sporting League, etc., etc."  It is possible that these are names of darts from another maker, obviously, as even in the 1950 unicorn catalog I do not see reference to any of these save the Hexagon, and the ringed ones, but rings were (and continue to be) a ubiquitous pattern on darts.

Also interesting to encounter old darts terminology as well.  "off the island" referred to a dart that missed the scoring area completely, and "leg and leg" referred to a tied best of three match.  There was also the use of the word "Up" in 01 games that I do not grok.  The author calls 501 "501 Up", and mentioned 301 Up, and maybe a few others.  What does that mean?

Lastly, the author covers the "required officials" for a darts match: Referee, Score Announcer, Score Checker, Score Marker, and each team supplied their own Recorder (for the club record book).  He doesn't go into any detail about what these officials did during a match but I would love to see it in action.  I wonder if the author was not being a bit tongue in cheek in this section.

The games covered in the latter portion of the book are:

Scram
Exactly the same as described in The Little Red Book

Brag
This is the same as Scram but you have to call your shots, and slop doesn't count.

Pantathlian
This is the most physical, bar-roomy, game of darts I have ever heard of. Any number can play and you throw three darts per round.  It is played in 5 rounds, highest score takes the kitty, if there is one.  Elsewise, the loser can provide refreshments all round.

Round 2: Three darts with the players opposite hand.  All hits, in their entirety, count towards your score.

Round 3: All three darts thrown together (in a "splash").  All hits added to score.

Round 4: While blindfolded, the players gets spun around three times by his opponents and then reoriented towards the board.  Then, he throws three darts, singly, at the board and any hits go towards the score.

Round 5: Each player faces away from the board with their heels on the oche and throws three darts through his legs at the board.  Any hits count towards score.  Highest score wins!

Soccer
In this book the game of Soccer is far more complicated than in the Little Red Book. I have read it twice now and I am not sure I completely understand it.  Basically, it goes like this:


Tip the Tanner
This is an odd one, and a game that can only be played on a board that has a wire spider since it involves slipping coins under the wires.  One player elects to be the banker, and the others are all buyers.  The banker places a sixpence under any wire he chooses and then the other players have to pay him a penny per three darts to have a shot at it.  If you knock the sixpence out of the board you get to keep it.  With American coinage, we don't have any coins that are six times the value of another coin, but we do have several that are 5 times the value of another coin.  So you could place a quarter under a wire and the buyers would pay a nickel per round, or a nickel under the wire and charge pennies, etc. Seems like a silly game to me, but might be fun to try.

Sevens
This game another in which you must earn the right to score by hitting something on the board.  In this case it is the single seven, or any two or three numbers that total to seven exactly.  If the player has one dart left to score with he must shoot for score, and then the next round start over again with trying to hit a seven.  If playing partners it works exactly the same as if it were a two person game.  In this game, doubles and triples count as singles.  What is unclear is how many darts do you get to score with? The book makes it clear that if you spend 2 of your three darts getting the seven, then you may score with your last dart but that next round you start all over again.  However, if you hit the seven with your first dart, do you then get the remaining two darts to score with?  The book also makes it clear that if you spend all three darts getting your seven then next round you can score right away... but with your entire round or just the first dart, or what?  The game sounds like it might be fun to try but the rules are unclear at best.

Doddlums (or Table Skittles)
They say you learn something new everyday and this is what I learned today.  Apparently there is a fascinating pub game I have never heard of before in England called "Table Skittles".  If I ever go to England I will seek out a game and play it.  This dart game is apparently modeled after that other non-dart game.  It goes like this:

Round the Clock
Another game where doubles and triples count as singles!  All numbers but be hit in numerical order, and the 25 and 50 are optional.  The interesting twist here is that each score registered earns an extra dart.  So if you hit the 1, the 2, and then miss the 3, your turn is not over.  You retrieve your darts and keep throwing because you have earned two extra darts.  And if those two darts also score?  Yup, you get to keep going.  This seems like it is very similar to 8-Ball in pool because you could run the board without your opponent ever throwing a single dart.  This also makes winning the cork (or the coin spin?) exceptionally important!  A variation mentioned in the book is to have to hit the doubles instead of the singles (which is how we normally play here).

Handicap Round the Clock
In this game, you only play the numbers 1 thru 10, and each number is shot at in numerical order, advancing numbers each round.  So in round one, all players aim at the 1 bed, scoring anything they hit in that bed alone. If you miss the 1's entirely you score nothing for that round, but move on to 2's next round anyway.  If you miss any of the higher numbers (8, 9, 10) in those rounds you tally your score and stop playing.  Once all ten rounds are over, the player with the highest score wins, even if it is a player who missed the 8's or the 9's and had to stop playing.

Shove Ha'Penny
In this game, any number of players can play and only the numbers 1 - 9 are used, with an optional "W" (stands for "Woozle" (which means bullseye)). Each player must get three hits in each number to win and the first to do so wins, but each player also has one opportunity to tie after the first player completes their numbers.  There is no score in this game.  The interesting twist with this game is that if you score more of a number than you need to, you shove the extra scores to the right on the scoreboard.  So if you accidentally score five 1's then the two you do not need are given to the player who comes after you.  If he only needs one, then the remaining extra goes to the next player who needs it.  The one catch is that you cannot receive the winning mark.  You must throw your own winning dart.  The game seems very socialist to me.

Golf
Two variations are given in this book. One variation is exactly like the game Captain Everson describes in his book.  The second variation is very similar to the first, with the exception that only one player can win a hole, and once that hole is one the play moves on to the next hole.  The player wins the most holes wins.  What's a little bit unclear, however, is how one wins a hole.  The book seems to imply that all that is needed is for a single dart to hit anywhere in the number.  Seems a bit too easy.  I like Captain Everson's version better.

Cricket
The author presents three variations of this game, and none of them are the cricket we know and love from American dart leagues.  Rather it is a darts game modeled loosely on the field game of Cricket (an ancestor of American Baseball).  Some people know this dart game as "Wickets and Bats".

In all variations, the players take turns being the bowler or the batsman.  Of the bowler he must get a number of wickets, and during that effort the batsman does his best to accumulate score.  The variations all have to do with what constitutes a wicket, how many wickets are needed, and how one accumulates score.  Once all the wickets have been scored the players trade roles.  High score wins the game.

Variation 2:
10 wickets must be scored. A wicket is a bull.  A batsman can only keep whatever he score above 40 in each round, including bulls, doubles, and triples.

Variation 3:
10 wickets must be scored.  The wickets are the doubles 1 - 10 (in order). A batsman may score anywhere on the board except the currently needed double, which gets him out.  He keeps all the points he scores during the round.
Posted by Zeeple at 9:50 AM