Thanks for the comments you have been leaving and the fact that you have been checking my blog with a great deal more dedication than I have been posting to it. My silence has been long but it has not been golden. I have been busying myself with many things over the last month but unfortunately little of it had to do with darts. I have been dedicating myself to work and the pursuit of a Linux certification (which had led to the creation of a new blog - with only one post so far!!): 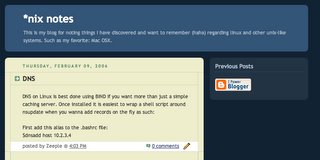 There are also other distractions which are not relevant to mention here (but most of them are good things...). Let's just say one of them led me to the discovery that Tungsten is used in other industries than darts ;)

Darting has been hot and cold for me in January 2006. I have been continuing to work on my July-2004 project, and I have joined the Steel Tip league again although I lost my captainship through an uncanny and unfortunate process of fission, then fusion. Our first week in league was a bye week so we had a team practice. I won all the games I played, but had to leave early. I was only playing against my teammates though, and we are all B Leaguers so winning the games I did play was no big feat. I don't think I had any good darts to report other than maybe a hat trick and some six mark rounds in cricket.

As evidence of my degradation, I offer this photo, which shows three darts all aimed at the triple 20!! Where has my accuracy gone? (I know, I know: "what accuracy?"): 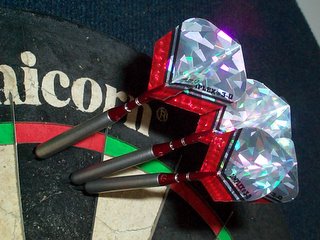