The Good, the Bad, and the Fugly

Last night was my first league match of the season. And as is almost always the case with my league nights there were good points and bad points.

GOOD point number one came in the very first round of the night. I won the cork for me and my partner for a 501 game and I then proceeded to open the game with 120 points, shanghaing the 20's. I was quite happy with it. I do not know for sure what my all time high in is but that is aamong them. The rest of that game was BAD. I hit low numbers and missed many many doubles.

GOOD point number two was quite a gem. In the next game, doubles DIDO 401, I won the cork for us with a double bull, and then proceeded to double in on the double bull as well, on the first dart! What a way to start the game. The next two darts were nothing special, I think a 5 and a 20, but DB-in is hard to do (for me). I later took out 8 to win the game.

My next three games were all singles games making up a Chicago match. As usual, they put me against their strongest player for these games (I wouldn't have it any other way) and I struggled to say the least. GOOD point number three came during the first of those games when I was able to pound the bulls to come back from a huge point deficit and win the cricket game! And he opened the game with two triple 20's, so the deficit started early. Needless to say I was stoked and he was pissed.

The next two games were 501 and 301 respectively, and they weren't just ugly, they were FUGLY. He hit high scores and I answered with low scores and I never had a chance. I doubled in on the first round for the 301 game, but that was the only non-fugly part of those two games.

The last GOOD point came when me and my doubles partner beat that same guy (and his partner) twice in a row during the doubles Chicago match. Once again, the first game was cricket and my strong point was bulls. Gotta love it. 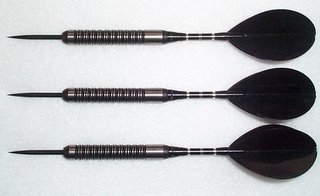 Intersting. We are already in the 5th week of the season. 15 weeks total. How many weeks does your season last?

Nice start on the DIDO 401. I think my only highlight of the night was the 4 bull to win my Doubles Cricket match.

I played horrible last night. I won all of my matches but my personal performace sucked. We're talking like 35+ darts in both 01 and cricket. I have been in a slump since week 14 of last season. It seems like it is never going to end.

It seems like it is taking way to much effort to throw a dart. I know something just doesn't feel right but it is so hard to describe. Too bad I don't have a video camera. Maybe that would help figure out what is going on.

your darts look very much like the Taylor purists . . .

mcvickj, our season is only about 10 weeks and that is a point of contention here. Everyone wishes it were longer but there are not enough teams. We were hoping for a 15 week season.

Taking way too much effort to throw a dart? In a multi-week slump? mcvickj you need to mix it up a little. Do something different to throw yourself off for one week, and that will break your cycle. Here is an idea, put some conversion points on some extremely light darts and play with those for a week! 14 grams! No kidding!

And a video camera isn't going to help. The difficulty is in your head (probably) and you cannot video anything in there ;)

Yes, the grip looks the same. Maybe the barrel of the purists is a little bit longer. They are available in 24 grams only.

That is one thing that I really like about Unicorn. When they say 'purist' they aare not playing semantics!! Those darts only come in 24 grams because that is the weight Phil Taylor throws!! Unicorn doesn't dilute it by trying to make multiple weights. It is also very encouraging to me to know thaat a good dart player like him also prefers 24 grams.