This is my sixth lifetime Ton-80 and my first with these new darts. They are now officially broken in. This shot occurred tonight during a practice routine which also happens to be the now infamous 10 Game Challenge (XGC for short) on www.paulwilliamsdarts.co.uk. The way it works is this: You play 10 games of 501 on Dartpro and then post your score and notes in the Challenges thread. Tonight I did better than I normally do and had a few noteworth occurences.

First, the Ton 80. That is obvious, but also the round after the Ton-80 my first dart hit the triple 20 again, and I do believe that is the first time in my life I have hit four trip 20's in a row. Unfortunately the next two produced single fives for a score of 70 in that round.

Second, I had a feel good out. That is I had 90 left and three darts to get it with. I figured I'd go triple 18 double 18 and leave a dart in my hand. The first dart missed into the single one, but then I hit triple 19 double 16 for the out and I really enjoyed that.

Third, mid way through the 10 game set I happened on a slightly different throw. It worked well enough to generate good score, many trip 20s and I had tight groupings. But by the time I finished the set I'd lost the new throw!! How do you explain that? 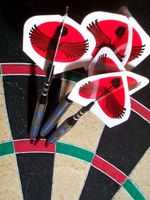 As always, click the image for a larger picture.
Posted by Zeeple at 5:21 PM

Those 180's are flying in now, aren't they. I'll have to check out the challenge you speak of when I get home, because my works PC blocks the site as "Chat".

LOL. Yes they are flying in so fast I cannot keep track of them anymore! Wait, no that's the Fish n Chips I'm thinking of. I can still count my Ton-80's but now I need two hands to do so instead of one!