Discontent and the Opposible Thumb

I once had a professor in college who claimed that the two contributing factors that most accounted for homo sapien's rise to the top of the food chain were the opposible thumb, and discontent. He was one of those charismatic professors whose popularity propelled him to blowhard-dom and somewhere along the line he lost the respect of most serious students.

As it happens I think he was dead on regarding this particular theory, and I think these two things also account for most of darting in the modern world. The opposible thumb because, hey, who can throw a dart without one, and discontent because no likes a score of 26, or 41, or 41's equally miserable cousin, 45. Discontent also accounts for the predicament I find myself in now with my GT3's. 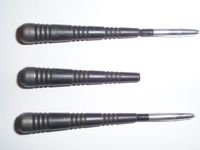 The set of GT3's pictured above were bought on the cheap, about $30, recently and from a bar owner in Seattle who didn't want them anymore. I wanted them, though, but knew I'd have to modify them before they became good darts, and I set about doing so. First let me say this: The GT series' darts of the era predating the screw in shafts had a couple of major flaws and a few minor ones (strictly my opinion). The first flaw was that they came MP only. Not much can be done about that. The second was that the shaft end of the barrel had a smooth threadless hole to accommodate their push-in shaft system, which left much to be desired. However, with the advent of their new screw in shafts they started threading those holes. Good move. But the GT3's I bought second hand were the earlier kind, and so I asked a friend to tap them with the proper thread size, so I could use the new shafts with them. In the picture below you can see the GT3's above the GT's each with the different shaaft systems. The GT is a much more solid dart to throw since the shaft can be screwed in with a drop of lok-tite. If I could do the same thing with the GT3's I'd be much happier throwing them. 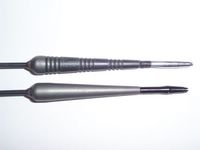 Oops! As you can see in the pic below, the tap broke off in the first dart he was working on and he couldn't get the tap end back out. So now, the entire set is screwed until I find a replacement for the third dart, or figure out how to get that tap end out of there. What I'd really like to do is just have a full set made, fixed point this time, but somebody with a lathe. So if anyone has an idea how to get that tap out of there, or would like to make a set of similar darts for me, please let me know! It should be known, btw, that I do not have any hard feelings toward my friend at all in this mess. He was doing me a huge favor by attempting to tap them out in the first place. 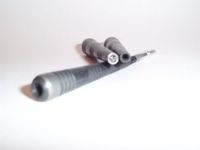 I find it hard enough getting a broken stem out of the thread if it has snapped off and left little to grip, but a tap sounds a real problem. Could it be drilled out with a really small drill?

That is a good suggestion, but I would have to find a bit hard enough to drill into a tap. Taps are especially hard since they are designed to dig threaded holes in other metals! I am going to try soaking it in WD-40 first, and then maybe drilling it.

I spoke to the folks at Voks about having them make a custom GT3 style dart with a fixed point last year. They said they could do it, but the cost would run between $200 to $300 dollars. I spoke to them at length, they took the time to explain why so much more difficult than a regular dart (due to the taper and very slender rear, complex to setup and difficult to lathe). After talking to them, if I ever pursue it I would get them to do it, they know their stuff. But sure expensive.

I was turned onto a guy in Canada who was willing to make the replacement dart for $35. Voks is a good company with good darts. But look to the independent lathe operators for custom stuff!

So, what's his name? I'm interested. Can he make them so they will accept the new threaded shafts? And was that for one dart, if so, what's he charge for a full set of GT 3 look alikes with fixed point? If the cost is about the same as a regular set of gt3's, I'll buy a set. Maybe we can get a discount on a multi-set order ;-)

I had a similar problem where an aluminum shaft broke inside the barrel. I was able to drill it out using my Dremel.

Another suggestion would be to use a cutoff wheel on the Dremel. You could cut a slot on the top and then use a standard screw driver and back it out. All though I don't think this will work. Considering he was tapping the threads that bit will be very snug.

You could also try an easy out. A place like Sears, Lowes or Home Depot will have this. I believe they make them that small.

If you choose to get that replacement dart made by the guy in Canada be sure to post an image. I would be interested in seeing it.

Hopefully in a few weeks I'll get the results back from the guy in canada along with permission to post his name and email address on this site! I am looking forward to getting them back.