A Happy Ending to League

Last night was the last match of Fall 2019 B League (at least for me - my team might play a make up match next week and I will not be on hand for it).  It was a great night form start to finish: I had a quality warm up game against a teammate with a 92 finish, I won most of my games in the match, even if I didn't have a single drop of tonnage, and after the match I proved the adage 'there's no music in a piano'.  I had a wonderful evening and it was a nice way to end my B League experience.  My team lost last night, but only barely, and it would have been our first and only match win had we won even one more game last night.  But alas.  I have been back in league for two full seasons now and my team has finished dead last both seasons, with only a single match win between them.  That's okay.  My goal was to have fun and raise my own game a little bit and I think I may have done both of those!

Here is how the night went:  When I arrived the only other player there was an opponent named Jeff, with whom I have shared a few non-standard games in the past, and I was hoping he'd be down for a game of Shove Ha'Penny or Golf or something but he just wanted to warm up.  Then my teammate Cory arrived and we played a couple of warm up games.  The first was a 21 darter for me in which all of my scores were at least 60, and which had a 92 finish (that you can see below) in the style of S20, T12, D18.  My first dart aimed at the double was a hit and that was happily more portentous than our next warm up game.  The next game we played I went 125, 100, 85, 43, ... and it went down from there.  We both ended up at double 1 and spent too many darts at it to count, and we ended up aborting the game because everyone else had arrived and needed to warm up.  Happily, that turned out to be the only instance of my finish truly suffering this evening. 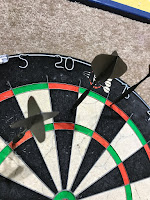 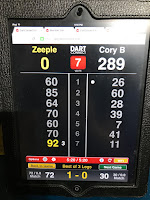 Then the match started. I captained for the team last night since our normal captain was traveling. I played two singles games and won them both, and five doubles games and won four of them. The team game was also a win, making the evening one of my best in terms of personal win loss ratios, even if I was severely lacking in tonnage.

My first singles game was a 401 against their captain Ori, and I won, but only because I missed my out one fewer times than Ori.  It was middling scores all the way down. Once I was at 80, I went 20, 20, then missed the double 20 into the double 5 leaving 30.  Then I missed outside with all three darts next round, but hit the double 15 with my first dart next round.  I had four missed shots at a double but I do not think my finishing suffered, and while it was a B League caliber game, it was a happy win.

My second singles was a Cricket game against Bill, whom I will be seeing in Metro League soon.  I won the game handily.  I had a 2.5 average, no dead rounds, and I hit the bulls when I needed to, finishing them off in 2 rounds with an inner and an outer in the last two rounds of the game.

My first doubles was a 501 with Cory. Not a great game on my part. I ended up with 69 and left my partner with 32, which he halved next round. Then I missed the double 8 three times outside next round and then he took it out first dart his next visit.  Three misses is not suffering exactly, but who knows how that would have gone had he not hit it.  My next doubles was another 501 with Chris and this was my only loss for the night. I threw low scores all game until I hit a 94 to leave my opponent 44. He whittled that down to 20, which I missed outside with three darts.  Then he whittled it down more to 4, which I then missed outside with all darts.  Then we lost.  However, I will say my shots at those outs were close with every dart.  It did not feel like suffering at the time but by the numbers I have to admit it was.  My last doubles 501 was with Julia.  No tonnage, but the finish was nice.  I was left with 90. I missed the triple 20 into the single with my first and second darts, leaving 50, and then missed the inner bull game shot by several inches into the 17, leaving 33.  Next visit she whittled that down to 14, and I hit the double 7 with my first dart my next time up.  That was a nice little win for us.

Doubles Cricket went swimmingly.  My first was with Cory.  Not a single dead round between us, I hit one 5 mark round, and Cory went bull, double bull for the win in the last round.  Good stuff.  My last Doubles Cricket was with Chris and it was a thing of beauty. No dead rounds for either of us, and in my last visit I hit a Hat trick for the win.  It felt wonderful.  So wonderful, in fact, that I took a pic (below).  Happily, that wouldn't even be my best Hat Trick of the evening. 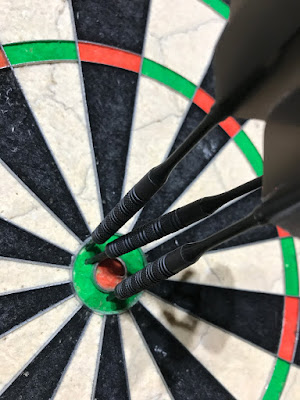 The team game was uneventful for me.  No tonnage, and when left with a 20 I could only whittle it down to 4, which Cory took out during his next visit.  However, that win in the team game was enough to allow us to lose the match by only one game.  We had already lost though, as we went into that game 9 to 11.  The final score sheet: 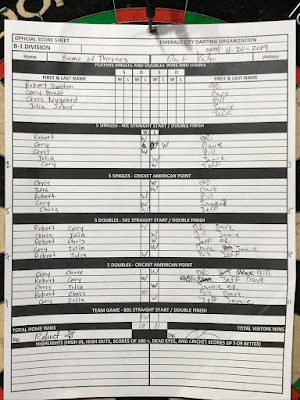 After the match a dude name Nate showed up and wanted to play a game so I obliged him.  We played no-slop, no-points cricket, 20-down.  I won that handily but throughout the game he was asking me a lot of questions like how to stand, the difference between darts, etc.  I explained to him that the dart itself makes absolutely no difference whatsoever.  He was throwing very, very cheap brass bar darts and I was throwing the 24 gram Laserdarts Black Eagles that I'd been leaning on all night.  $3 darts against $125 darts (which were wearing Fit Flights, adding to their value). But to emphasize my point about there being 'no music in a piano,' I swapped darts with him and said "Watch."  I then promptly threw another Hat trick (seen below) with the $3 bar darts.  He was impressed, and my point was not just made, but proven: the darts themselves don't matter. 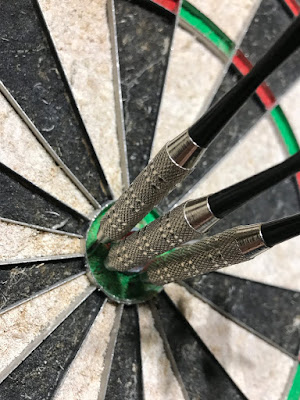 It was a great way to end the season.  A wonderful night all around!
Posted by Zeeple at 8:38 AM