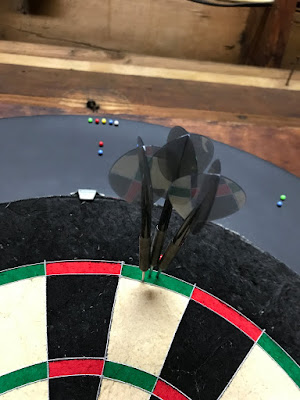 You can see from the red pin above the double 1 that only the first and second darts were supposed to be aimed at it.  A red pin signifies that it was the last double in the counterclockwise doubles circuit.  After red, comes the yellow pin which means that I then work through the doubles in numerical order, ascending, which means that the second dart should also be aimed at the double 1.  Since I also hit that, on a lark I threw the third dart at it as well, hitting again, for a nice little Doubles Trick.

These came off the 22 gram Smart Darts, wearing tweenie pear Condors.  Between this and the recent maximum I hit with them, I am increasingly liking these darts!
Posted by Zeeple at 9:35 AM