Followers of this blog know that I have been a fan of the Bottelsen GT line of darts for a long time.  I have had several sets that predated their threading system and thus were limited to the push-in stem system that they produced for early version of the GT.  There is nothing wrong with that system, necessarily, but it is nice to have options, and sometimes the old push-in GT stems were seem a bit loose or wobbly.  Threading them was a brilliant idea on their part, and their new screw-in stem system is quite nice looking aesthetically, and feels solid when properly installed.

But I have always been a tinkerer.  Back in the day, I made several attempts to mod the GT to accommodate spinning flights, like this one, and this one. Recently I picked up a set of 23 gram smooth GT's on ebay which lacked the modern threading, and whose stems were a bit on the worn side.  Thus I started to wonder how I could improve the darts a bit :)

I started by rifling through my myriad of stems looking for anything I might cannibalize for this little project.  I came up with three possibilities:  a 2ba wire stem, a 2ba fiberglass stem ("Jet Stream" stem, maybe?),  and also a Voks stem designed for their GT-esque Javelin line of darts. The Jet Stream stem was too weak and too well glued together.  I completely crushed it trying to remove the thin stem from the plastic bits on the ends.  The wire stem, on the other hand, came apart more easily, especially with the help of a vice grips and a desk mounted vice. You can see in the pic below some of the pieces I was working with.  The thin metal piece by the ruler is the wire part of that stem extracted from its other bits.  However, neither the Voks stem nor the wire stem would fit into the end of the bottelsen dart with ease.  They both felt just a micron too wide to fit in there. So... 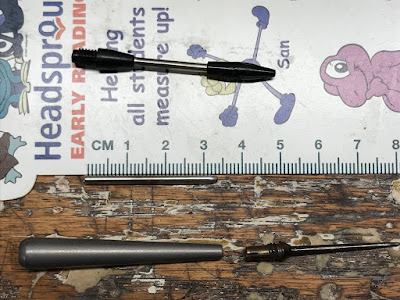 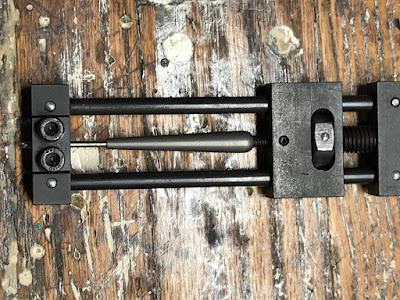 Same process for the Voks stems... 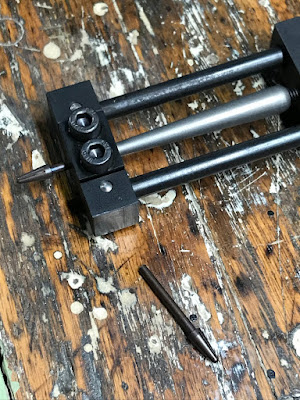 Below you can see a couple of pics of the three different stemmings side by side, unflighted. There is a little bit of Goldilocks, here, I think.  The original stem on the far right is too close to the barrel.  Too short.  And it is also aesthetically jarring with the black gasket and aluminum stem.  The middle stem (which was originally the 2ba wire stem) is a bit long for the barrel, and the plastic bit on the end is too big.  Aesthetically speaking it overpowers the dart it self.  The Voks stem, on the left is just about perfect.  The length is good, the color matches the theme of the dart, and the bit on the end is also quite sleek compared to the the other two. 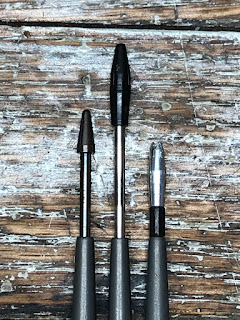 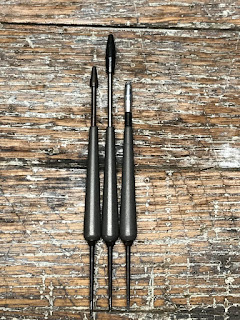 In the end I decided to go with the Voks stems pushed into the barrels 4 mm.  It seems to be a good length and should take a smaller standard flight or a pear shape quite nicely.  How they perform over time remains to be seen.  It could be that the ever-so-slightly too-large stem diameter has stressed the tungsten barrel near to the breaking point, and an unlucky stem-first landing bounce out will cause the barrel to shatter.  Remains to be seen, but I am looking forward to putting this set of darts through their paces.  If they shatter they shatter and I will not lose any sleep over it.  The experiment was fun and rewarding already :) 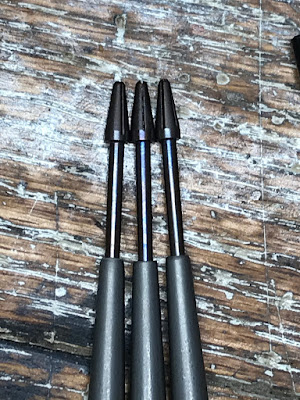 I am hoping to be able to post pics of Ton-80's with these darts soon.  Stay posted :P
Posted by Zeeple at 3:23 PM