Its the Artist Not the Brush

Last night's league match was wonderful.  My team lost 12-9 but I had a great night out due not only to my darts flying right, but to the friendliness of the competition.  We visited the Three Lions pub in Bothell.  Like their sister bar in Redmond, they attract not only good dart players, but super friendly ones too.  And on top of everything it was a breath of fresh air for everyone on both teams to still be sober by the end of the evening!

Here is how the evening went: I played seven games total, two singles, four doubles and one team game. I won both the singles games and three of the four doubles matches, but in the team game we got flattened like pancakes by their dominating performance.  I threw rubbish, and everyone on the opposing team stepped up and delivered.  They finished the team game with a 70+ three dart average. Quality darters, those.

My first singles match was a 401 against Niko.  I didn't hit any big numbers in the game but I was solid, hitting a single triple, but averaged 54.7 for the game, and the best part, the happiest part, was that I hit my out with my very first dart at a double. It was a 22 dart game and I finished on double 8.

My second singles game was Cricket against their best player, Doug.  A fine chap and a great dart player, but in this one I got the best of him. I had one 5-mark round, no dead rounds, and finished with a 2.4 average.  I felt strong in that game.

My first doubles game was a 501 with new teammate Chris.  He is a good addition to the team as he takes darts seriously as a sport and is probably as big a dart geek as I am.  Another fine performance in which I did not put up any big numbers other than a couple of 80ish rounds, but took out a 44 for the win with single 12, double 16. Again, it was my first dart at the double and it hit.  That felt good.  To this point in the evening, I can honestly say that I did not miss any double that I threw at :) . The streak would not continue, however.

My next two doubles games were Cricket, first with Cory, then with John. The first was a win.  I didn't have any impressive rounds but I only had one dead round, and Cory finished the game for us with a clean dosser.  Good on him!  The second game was a loss but we fought like hell.  It was a high scoring game, 409-322, and while I didn't have any high rounds, I only had one dead round, but we couldn't hit enough bulls to catch up when it counted.  They got that one.

I covered the team game earlier.  We lost that one cleanly.  Here is the final score sheet: 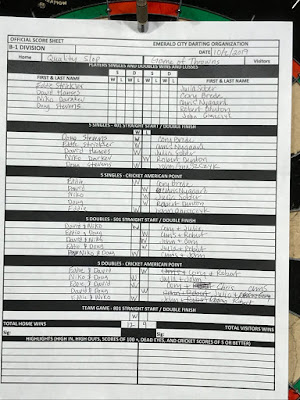 One of my favorite dart stories to tell took place when I was living in Pittsburgh and playing league there.  one day I was at a blind luck shoot with a good number of people participating.  The place hosting it was a bowling alley that had a large dart room with at least a dozen steel tip dart boards hung (permanently, not just for the shoot).  All of them were in use, as I recall, and you couldn't see one end of the room from the other for the smoke. A guy came in to play in the shoot and ended up in the barrel.  He didn't have any darts with him so he grabbed three bar darts from behind the bar and used those.  They were all brass, and none of them matched.  It was basically three random brass darts, and that is what he used.  He did not drop a single leg and won the shoot.  I told him that I thought what he did was amazing, especially given the darts he was using.  He just smiled and said, "Its the artist, not the brush."

Last night I took brass darts with me. Not for any particular reason, but just because as a darter I have been feeling "brassy" lately and I wanted to give them their "solid night out".  I do love me some brass darts, no joke.  But I wasn't trying to make a point or show anyone up who had expensive darts or anything like that, I just liked the brass ones.  So I brought them and they fucking flew for me.  I think they cost about $2 when I got them (used). You can see them below dressed in medium nylon stems and standard poly flights. 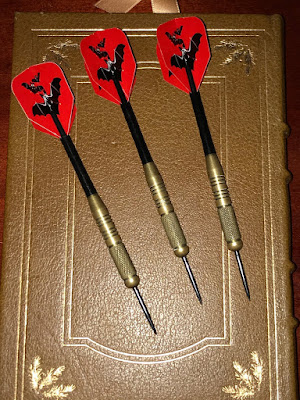 I had the book with me because I needed to get my tires replaced before the match and I knew I'd need to hang out in the Les Schwab waiting room for a solid hour and a half.
Posted by Zeeple at 8:36 AM