How to Play Fifty-One

"Fifty-One" is a fun game which my friends, teammates, leaguemates, and workmates have all enjoyed immensely over the years. I have seen this game described in various dart books and there are surprisingly few variations. Most older books call the game 'Fives' and the score is counted up to 50, not down from 51. Here I lay out the rules for the game as I know it.

51 is usually played with two players but since it is a race to 0 any number of players can play with no variation in the basic rules. Each player starts with 51 points. First person to achieve a score of 0 exactly wins. The trick is, in order to subtract points, your totaled score for the round must total to something divisible by 5, and all darts must contribute 1 or more points to that total. So if any one of your darts hits a non-scoreable area, that is a bust for the round. This rule also applies to the last round. When you win the game, all three of your darts must score. Once you have a total that is divisible by 5 (leaving an integer), you subtract the dividend from your score. An example:
And so on.

A nice finish in a quick (very quick) game of 51 at work. That 145 translates into 29 score-able points. The game below occurred on Dec 20, 2010. I have no idea anymore what I was throwing in that game. Might have been my old Co Stompe Matchsticks. 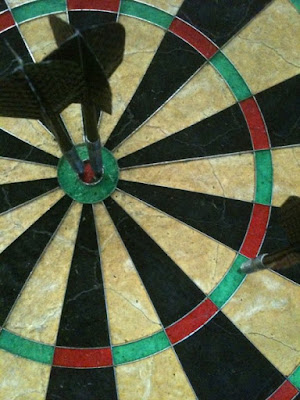