For those of us who really like the GT line of darts and who also really like the Dynastar stem and flight system we are constantly caught betwixt two opposing worlds. The GT takes only it's own proprietary shaft system and the dynastar stems come in either 2ba thread or this other very tiny thread meant only for the "Pro-Line" line of soft tip darts.

Oh, East is East, and West is West, and never the twain shall meet,
Till Earth and Sky stand presently at God's great Judgment Seat;
--Rudyard Kipling
However, there is good news: I am working steadily at forcing Earth and Sky before the Judgement Seat with at least two different modifications, and maybe a third, for the dynastar system, which I am dubbing the Dynamod. The GT line of darts is just absolutely terrific. I cannot sing it's praises highly enough. The taper is so salient and supple that any person is compelled to pick it up and throw it at something. The progressive forward weightedness of the dart barrel is very forgiving and will correct many subtle flaws in form and execution. Thus it is the perfect barrel style for me.

I feel similarly about the dynastar system. I like the free spinningness of it, as the slightest whisper of a breeze will send it into a blurring frenzy as it spins on the little wire stem effortlessly. The molded flights are always square, and the whole system resists robin hooding better than any other stem and flight system out there. So it just seems natural to somehow strive to combine the two systems into one dart.

My first effort at this unholy union can be seen below. It all started one night when I was tossing darts and I was using a dynastar stem in a regular, 2ba threaded dart. The stem was nylon with the nylon part very short and the wire stem longer. I did something and I cannot remember what but the result was that the little wire stem came clean out of the nylon base!! I was surprised to see that the stem came out so easily, but nonetheless there it was.

This was back in the days when GT darts only had the push in style stems that had the little rubber housings that held the metal stem that pushed into the back of the dart (oddly hard to describe...). It occured to me to wonder if perhaps the wire stem that has come loose from the nylon base of the dynastar stem might not fit into the rubber gasket portion of the GT stem. Alas it did not. However, it spawned the following idea: 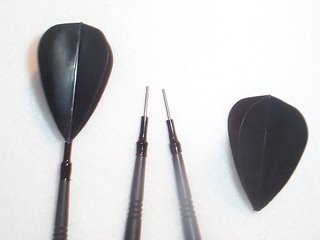 What I did was I wrapped some scotch tape around one end of the dyna-wire to make it thick enough to fit in the gasket snugly, then I bought some of the heat-shrink tubing from a hobby store. I cut the heat-shrink tubing to fit and used my heat gun to form it onto the entire assembly. The result was a slightly unattraactive dynamod for my GT's. When I first put this ssytem together I had not yet started blogging and I did not have a digital camera, whatsmore I only had my 28 gram GT's. I do not have a picture but the dynamod is easily transferable to any GT dart. The darts in the pic above are 20 gram GT2's. This was my dynamod for several years. Until the rubber gasket from one of them broke off inside one of my darts!! Time for a new plan. More to come.
Posted by Zeeple at 6:17 AM