For as long as I have been playing darts I have been aware of Bottelsen and the awesome darts the produce and sell. However, this whole time I never paused to consider that perhaps they have not always produced their current line and may have once offered fixed point versions of some of their more popular darts that now are only offered as MP systems. Well, one day while I was kicking about ebay I saw an odd dart that appeared to be a Mega Thrust, but was FP!! 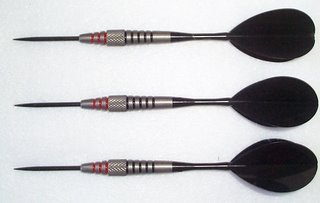 I have been using these darts in League for the last couple of weeks and I have been loving them. I would rather that they were a couple grams heavier, though and it is making me seriouly consider getting the 24 gram version of the modern Mega Thrust. I have a new idea for an awesome conversion point that will make the dart fixed point to the naked eye. Not sure if I will or not, though. Gotta wait and see how these current 22 grammers pan out.
Posted by Zeeple at 6:52 PM