You know, when it comes to exercise and weight control and general health matters an activity regmine is very important. But the reality is that most people simply have jam packed lives and cannot dedicate as much time as would be ideal for their bodies to the pursuit of superb fitness. And while a well rounded routine is the best goal, sometimes we simply do not havee that much time and we are either forced to choose to scale the exercise back or skip it altogether. Most people will use the excuse that they do not have time to excercise "properly" so they simply don't do anything. But if they had a sense of exercise priority they would hop on the excersise bike for ten minutes instead of do nothing at all. After all, if you only have 15 minutes to work out the no braainer is cardio. The heart is your most important muscle and you should give it priority. Those biceps can wait!

So why not apply the same thinking to darts practice? I have thought about what areas of my game are weak and I haave put together a prioritized list of whaat I should be working on. This list maay differ for different people mof course, but for me, for now, this is a terrific PPP:

1. 60's: The top priority in my practice routine, these days, is the triple 20. I say this because I cannot hit it with any consistency, and I do not have the confidence to hit it like I have confidence to hit mdoubles and bulls. When I am going for a double, I just KNOW I will hit it. At least with one of three darts anyway, and when I shoot for bulls I reasonably expect to get at least one in there per round. This is the sort of confidence I am seeking with the triple 20. So, before any other practice I am aiming at the 60, or the 'sweet spot' as I call it. My goal is to get 20 of them in there before I move on. The idea behind this being so important has partly to do with the fact that there have been so many league games lately where I have hit consistently low numbers and I am allowing my opponent to get to the doubles sooner than I. I have been playing this game long enough that I should be sinking my score quickly by now and I would expect my average to be significantly higher than it was when I first started. Unfortunately sometimes it is not. Also, I truly believe this to be the key to getting to the 'next level'. My goal for right now is to be able to hit at least one triple 20 per two rounds. That's right: one out of every six darts. This is no where near professional level play but you know what? I think it is a reasonable goal, and achieving this will allow me to win most games in league. It is doable. And the way I am going to achieve this is through sheer determination, and practice. The more 60's I hit, the greater my confidence will be. Soon, according to plan, I will have the same confidence level for 60's as I do for doubles or bulls. The pic below is one of the better rounds from a recent practice session. 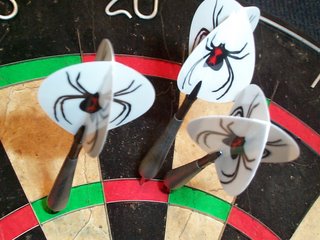 2. Doubles: So once you've slugged away at the triple 20 for a while and have added 20 instances of success to your sweet spot confidence fund, you can, as I do, move on to the doubles. Double practice is important. On this every dart player is in agreement. But how important it is depends on a lot of factors. What good are lots of tons if you cannot double out, and what good is being able to hit your doubles if you can never drop your score low enough to have a chance at it? The arguments are good in both directions and for me doubles practice takes a back seat to 60's practice for two reasons. First, I am better at them and have much more confidence in hitting them. Secondly, and most importantly, I do not see improving my doubles to be the key to accessing that next higher level of play. My weakness at the moment is not being able to hit the sweet spot realiably. Thus I only practice doubles if I have enough time, these days. And when I practice doubles, I do so in this order:


This is in the order that I consider them to be important. The pic below shows a recent round that I had just started. I was doing well in the beginning. I hit the 16 first dart, the 8 with the second dart and the third dart went to the 4 but missed (otherwise I'd have snapped a photo of the doubles trick). 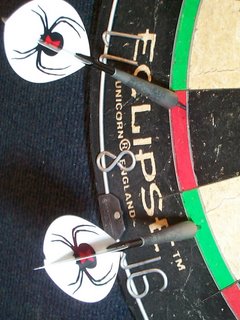 3. Bulls: And then, once the doubles have been nailed and I have time for more I shoot 20 bulls. The double bull counts for two hits, and the one caveat to this section of the practice is that I keep practiceing bulls until I have hit at least one double bull. So even if I hit 43 single bulls I cannot stop until I have hit that little red dot in the middle. Bulls are important in both 01 games and cricket. In the 01 games there is a rare occation to go for a bull during the game as a part of your strategy (50 left and one dart in hand), you also always want to win your cork if possible. So it is good to have solid confidence when aiming for the bulls. In the pic below I hit one out of three. That is more or less typical for me. When I am going strong I can usually reliably hit one or two per round. When I'm off, though, boy am I off!

Editor's Note: I took a break from this post and shot a round of bulls and I averaged a little more than one per turn and I had a few hat tricks in there. A HT +1 for that matter. If I can get past the 60's practice then I usually blow through the doubles and bulls vert quickly. 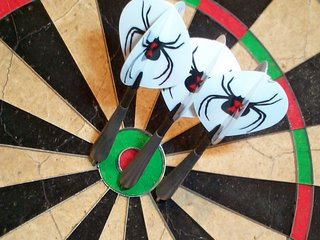 4. Other Triples: It would be nice to someday have the same confidence with the triples ring as I have with the doubles ring so I make a point to throw aa round of triples when time allows for it. I do not do the same order as doubles, obviously. I start with the 19 and work my way down. That way if I only have time for the cricket triples at least I hit the most important ones but if there is time I work my way all the way down to thr triple 1. I have aimed at the triple 1 before in real games. In fact I have aaimed at most triples in real matches at one point or another. 19 through 15 are cricket numbers, 14 through 11 are used if you have 64 through 61 remaining and have two darts in hand, 10 is used for 62 remaining with 3 darts, triple 7 if you have 53 remaining with 2 darts, triple 3 if you have 25 remaining and 2 darts, aand triple 1 if you have 5 remaining. I am not sure about the others at the moment, but I am sure there are uses. Regardless, theere should be no portion of the triples ring that represents difficulty because that is like a chink in your armor. 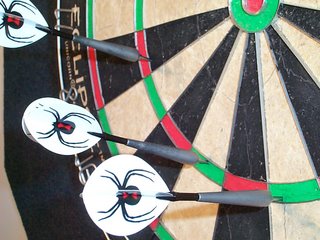 Math, thanks for the comment. 67 with two darts is definitely T17-D8/S17-DB for me. That is pretty well a part of my game now. Not sure if I would do the same with three darts though.

Juergen, thanks again for a nice tip. I have never heard of going T9 before. A miss into the S9 would leve you with 58 and two darts, which I guess is doable.