These are some seriously sweet darts. I have been throwing them and from the get go they have been completely brilliant. The very first time I threw em I hit a double bull. (That happens to me often. I can count at least three other times in bars where I have picked up someone's darts and hit the dead center of the board. Uncanny.) 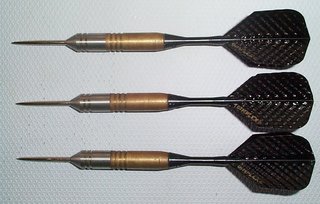 As you can see I have already configured them to my own sense of style and function. A shorter dart is better and a bigger flight for the heavier barrel. There are a couple of things I like about these darts. The first and foremost is that they were a gift from Mcvickj, with whom I trade darts occasionally. The second is that they are big thick barrels that have some real heft to em. I have been leaning toward more fuller bodied darts lately and these really fit that bill. Thirdly, take a look at the barrels. Tungsten up front Brass in the rear. That reminds me of a hair cut...

Business up front, party in the rear. Who can name that doo?

Another interesting aspect of these darts is that they are threaded 1/4" and so my stem selection is limited to what few of those I have. These black aluminum 1/4" stems work nicely however and so there is no need to fret on that one. I plan on using these in league this year. I have already hit some pretty good numbers with them in practice and the way I hold them really makes me point them at the board. I feel a little bit of the old spin creeping back into the throw too. Can't wait to see how that pans out.
Posted by Zeeple at 1:23 AM No comments:

These darts disappeared from the catalogs in 1971, and the 1970 catalog has them marked as 'deleted'. There are in the earliest catalogs too, so these darts could be anywhere from 55 to 35 years old, I'd say, or older. 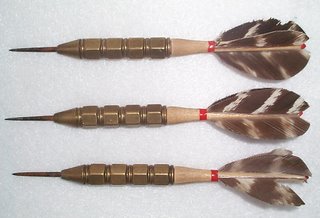 The Barrels are interesting. They are hexagonal, which prevent the darts from "rolling" in your hand and enforces your grip to some small degree. Here is a closeup of the Barrels. 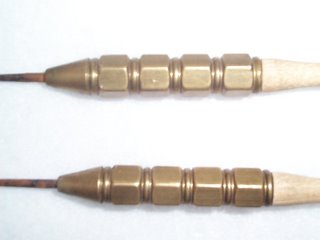 Once I get some new feather flights for them I'll comment on how they throw...
Posted by Zeeple at 6:54 AM 2 comments: 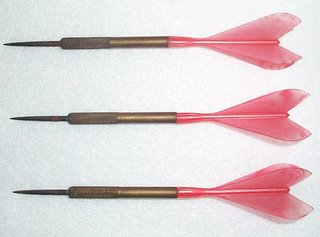 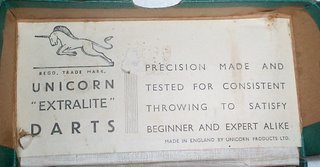 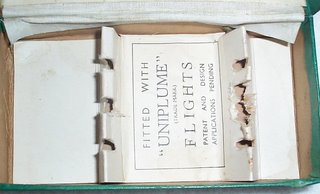