The Trouble with Triples

I almost quit last night. The league games were postponed in favor of an impromptu Luck to benefit a long time league member who had a stroke and I was certainly glad to pitch in for that cause. In fact I had decided from the get go that if I won the luck I'd kick in my winnings toward the guys relief fund as well. But I never came close. I won a total of zero games and was out very very quickly. My partner did not help but I do not want that to sound like I am blaming him because that is not the case. We were just both having an off night. I hit nothing worthwhile, except a bunch of bulls that got us back into the cricket game. It came down to 'Next Bull Wins'. 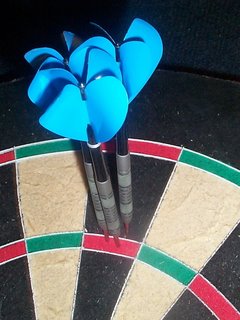 Anyway, that is not what this post is about. Rather I wanted to comment on the trouble I have with triples. And not just any triples either. The sweet spot. I stopped taking pictures of 120+ shots a long time ago because when I am in form and having a decent practice round I tend to hit them readily. I'll get a ccouple of 60s and a miss somewhere. The miss isn't always the last dart either, or I'd suspect myself of choking. The missing dart I would say is any of the three with equal frequency. I'd raather it were always the last dart!!!

What's that? I wish it were a case of choking? You see, at least then I'd know what the problem is and be able to work toward a resolution. Choking is covered in ample sports psychology texts and I am certain that I'd be able to overcome it. But when any random dart flies off course what can you attribute it to? The idea that some darts are too fat to fit in the triples is a load of crap. Have you ever seen the darts Jim Pike used to use? Besides, look at the pic below. Those are some Unicorn Brass Beauties I got for Xmas from my lovely wife, and are easily the thickest, or near thickest darts I own and as anyone case see there is plenty of space in there for more! Also, that theory doesn't hold water when it is the first dart that misses. 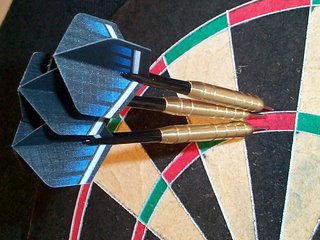 My current working theory on this issue is that I am just not consistent. I know I am capable of the accuracy, two out of three darts in the sweet spot seems to confirm this. And I know I am capable of the prize because I have done it before. There are so many variables, and worse - nested variables - when you step up to the oche. How you hold the dart, how you stand how you follow through I will not name them all. So to overcome that random dart miss one must reduce the variables. Not as easy as it sounds for sure. The only solution is a more intelligent practice session on a more regular basis. I'll think on this for a couple of days.

Incidentally, The Trouble wwith Tribbles is easily my favorite Star Trek: TOS and my favorite DS9 episode.
Posted by Zeeple at 6:52 PM

Heh - I remember that "Tribbles" eposide, and even read the story in one of the books.

My thoughts are pretty much your final paragraph ; how you stand, aim, throw, feel mentally can all be done well. But not on every dart all of the time. The problem is that trying too hard to do it makes it almost impossible to achieve because you've just added another variable. It has to become an acquired instinct (oxymoron?).

I feel your pain. I am having similar problems. I know I can hit the numbers but without any type of consistency those high tons don't mean jack.

I would rather hit solid 60's all night vs. the occasional high ton or two during a game.

It has gotten bad enough where I'm starting to question either my form or release or perhaps part of both.

Who knows maybe it is just all mental. Who would think throwing this little dart at a board could be so fustrating. hehe

Tommo: I like that: Acquired Instinct. That is dead on. The jedi maxim "Do, or do not. There is no try!" comes to mind here.

Mcvickj: right on bud. I would rather be able to hit a single trip 20 every other round than be able to hit a high ton once a match. The consistency I would LOVE LOVE to attain (at least for now) is one triple 20 per six darts thrown. Seems like this should be realistic enough.