Doubling your Double Double Out with a Doubles Trick

Here is a fun trick you can only do half by accident and half on purpose. I say that because I did it by accident, but then thought it was neat. Well, not exactly by accident. I hit everything I aimed at afterall. 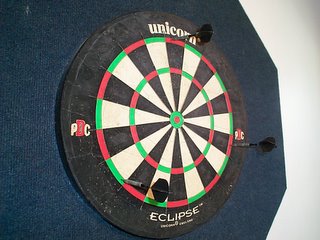 See, when you take out any number hitting two different doubles (on purpose or otherwise) you are accomplishing a "Double Double" out. When you hit three doubles all on purpose this is a "Doubles Trick". When you happen to be able to do both in one trip to the oche then you are..

Doubling your double double out with a doubles trick.
Posted by Zeeple at 8:47 PM

Do you rotate your board everytime you play?

Hi jsobo. Taking the nuber ring off is something that I am very glad I did even though many people think it is kinda useless. Not only do I know the wedges all the better now, it seems to help with over all out strategies, and intuitively "knowing" the outs. Hard to explain exactly. Also, it is easier to rotate your board since you do not need to readjust the number ring too.

I have not rotated my ne Eclipse yet, as I don't think it needs it. In fact I have to be careful not to rotate too frequently due to the method I use for holding the board onto the backstop. I have a long woodscrew going all the way through the backstop, and I have "spun" the dartboard onto it. Doing so make sure the board is very snug, but if I rotate too frequently, I will strip out the hole in the back of the board.

T16? I would love to hear your explanation of that. My reason for going for T20 is as follows:

The only really bad miss is into the S1, which leaves 71 with 2 darts. Doable, but you HAVE to hit your triple on the next dart!

72 - 16 = 56 So now you need another 16 and back at D20. Same shot as what Zeeple described but now you put a little extra pressure on yourself becuase your down to your last dart.

That is the great thing about darts. So many possible combinations to check out.

mcvickj: I hope you spent that last dart on the d10!

Sorry typo in the first line

hehe. I tried for a BULL but only got a single.

Juergen, that is a very compeling argument. As it happens, the new Challenge on paulwilliamsdarts.co.uk is 30 minutes of 80 remains. I am going to try it your way and see how I like it. And damn, 19 ton-80's?? Pretty cool.

Juergen... You're the only person I know in your country. Is there someway I can contact you outside the blog? Feel free to email me at zeeple at gmail dot com. Thanks!

> As it happens, the new Challenge on paulwilliamsdarts.co.uk is 30 minutes of 80 remains. I am going to try it your way and see how I like it.

> Is there someway I can contact you outside the blog?

An Often neglected choice for 72 with three Darts in T12D18 also a nice finish. If you hit S12 then look for the 20's to finish since you've probably been shooting there all night anyway.

Hey, that's a very good suggestion. I will try it!