These are some special darts. Most importantly they throw quite well, but also they are nice looking and as far as I can tell, a little bit hard to find these days.  I knew I loved them from the very first time I laid hands on one.  Back in the day, in my early days of league play, the owner of the bar that sponsored my team(s) had a set.  He offered to sell them to me.  I asked if I could throw them and sure enough, the very first dart was a double bull.  Just like that.  A B Leaguer like me suddenly made it look easy, with these Eric Bristow Power Points!  Foolishly I did not buy them.  This set I picked up much later.

Last night my neighbor and I went for darts and beers as we are wont to do, and I brought these and another set of darts.  I offered him the choice of darts and he chose the others so happily I threw these all night.  I did well.  When I play with him, because he never plays darts and I always do, his 01 games are SISO, and mine are DIDO with the added complication that I have to "Bull In" each round before I can score for that round.  I hit a lot of bulls last night :) 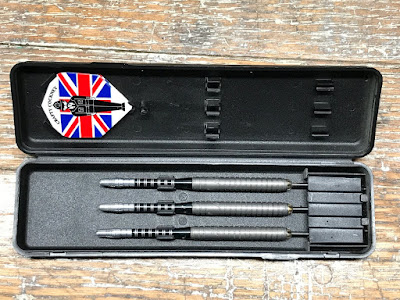 The Power Point line has always had a nice looking nose, and the second pic below kinda shows it off.  Most other screw-in MP systems have a collar that has flats on two sides giving the nose a definitive imperfect mechanical look but not these.  The only other MP system that I thought looked better were basically anything produced by Jeff Pickup (who, incidentally, invented the Power Point system and sold it to Harrows). 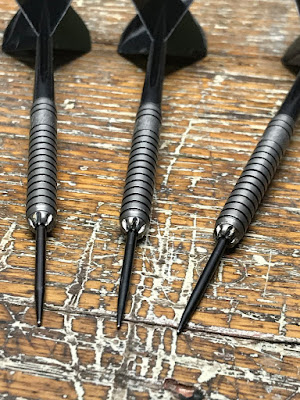 These darts also have better barrels than others in the Power Point line in my opinion.  They are thinner, for one, but also, they seem to have a higher grade tungsten for them to be so skinny and yet to weigh in at 22 grams.  The others (previously) are an 80% line and while I never have owned any they did not appeal to me visually with one exception:  the Power Point Dimplex, which I found to be too aggressively knurled, and not a good throwing dart.  The modern Power Point line is 90% I believe and they do not visually appeal to me either. 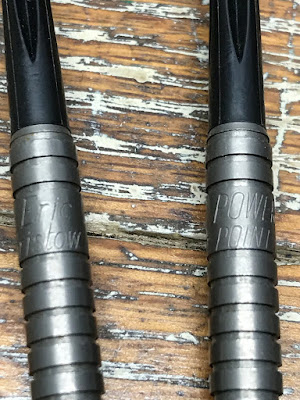 I have been dressing these beauties in medium, standard Condor stem-flights and that seems to be a good configuration for these darts.  They angle up in the board slightly, but not too badly.
Posted by Zeeple at 7:45 AM

Do you know how much they’re worth? I have the same set and was curious.

I honestly do not. However, I do know that they usually go for between $60 and $80 (more or less) on eBay, which is the only place I have ever seen them.

is this still available and for sale?

I am sorry, I am not selling these. Good luck with your search!

Carson, let me know if you want to sell them roofer.dave@hotmail.com