I happened upon a shoot last night!  I was in the mood for onion rings so I decided to grab a set of darts, more or less randomly, and head down to Cooper's since I knew they have four boards up and I'd be likely to find, if not some friendly competition, at least a free board to throw on.  As luck would have it I came upon Monday Singles League which was quite a fun time.  I placed third, which surprised me greatly since I felt like I was having an off night.  In fact, I do not believe I hit a single ton until my last set, and then I hit several (but no maximums, sadly).  But that their place scored me 15 bucks which was enough to cover my entry fee and the onion rings :)

The format was a Round Robin with 2 legs of SIDO 501 per round.  There were eight of us, and here is how my night went:

It started out quite fun because during warm ups I saw my buddy Jeff who was down for playing a non-standard game as way of warm up.  I taught him how to play traditional english Cricket (also known as Wickets & Bats) and I think he enjoyed it, although the game did not last very long.  He won the cork, chose bats, and on my first turn opened with four wickets!  As you can see form the score board below, I was able to surpass his score before he hit any of his 10 wickets, but I hope he enjoyed the game and will want to play it again! 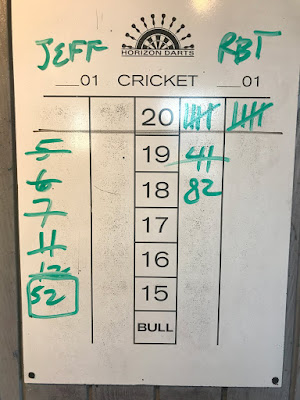 My first two rounds were against Jeff C and Karim on the side of the house that did not have iPads for scoring, so I have to rely on memory for those matches,  I do not remember them exactly, but I know I did not hit any big numbers and I won one each against those two opponents.

My third round was against Michael Bird, who when I first saw him in the bar I absolutely recognized but then could not remember his first name.  I knew I had been seeing him around league for a long, long time but it did not dawn on me until a bit of conversation with him that he actually used to be on my Ballard Station House team!  My brain has been removed from darts for so long that I couldn't even remember my old teammates :\  Anyway, we also split the round.  In the first match my only good hit was a 95, and my 20 out, other than that I had nothing to show.  In the second game I threw rubbish and then had several shots at the out until he took out 10 for the win. 3-3 on the evening thus far.

Next I was up against a new gentleman also named Mike who played well but I took both games off him.  My outs were 25 and 48 respectively, and neither one of us put up any numbers.  Now I was up 5-3.

Next up I was up against Jeff L who is the areas surest shot and the hardest to beat.  He is cool, calm, and collected on the oche and a swell fella.  He is also president of the league and devotes himself selflessly to it.  He took both games, but I made him earn them, at least.  In the first game I had no tons but I hit a small scattering of 60's keeping my PPT at 49.9 for the game. In my last round I was sitting on 102 and ended up busting with exactly 102: 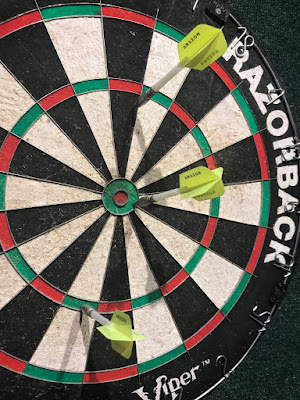 While that was aggravating, it was also my last opportunity to win the game as Jeff took won on his next time up.  In the second game my PPT was even higher at 53.9, and that ended up being higher than Jeff's but he still won.  I did have several shots at the out, so if I had been more "on" I would have had a satisfying split.  That round put me at 7-5 for the evening.

Last round was against another new guy named Jason.  He is a good shot and we split the round 1-1. In those two games I had two 100's and a 125. I took out 10 in the first game for the win and he took out his 9 in the second. I ended the evening 8-6 which was enough for 3rd place!