Last night I headed up to my home pub for the weekly Luck of the Draw shoot. One awesome thing about this shoot is that the bar always matches the pot. So the more people who show up the better for the winners. Last night only five people came! A small number to be sure so instead of doing a blind doubles shoot we did a quick singles match in which we all played everyone twice. I won 7 of my 8 games taking home the $25 first prize. The only game I dropped I dropped due to some sloppy doubles and I gave my opponent too many chances to win. Which he did, of course! I can't feel too bad though because he is my teammate during league and I am happy when he wins. As far as my performance goes I only hit one ton all night but I made up for this with plenty of 80+ scores and of course I was spot on with doubles. Rarely missing them with more than one dart. So for this reason I feel pretty good about the evening.

Last night I thew my Nobu's primarily but had my Magnums in reserve for those few times the Nobu's felt funky. The Nobu's were configured with short Dynastar stems and they threw completely awesome with this configuration. A moving point and a spinning flight might be overkill even for the most die hard gimmick junky, especially for me who has professed for years that a solid dart that doesn't rattle shimmy or shake on the way to the sweet spot is a well behaved dart. They served me pretty well last night. 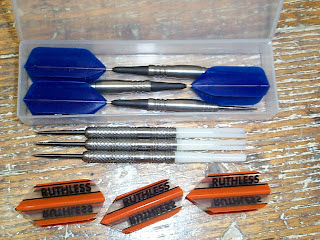 Sounds like a good competition. We used to play for a modest kitty on some nights, but we haven't done it for ages, and it just adds a bit to competition.

Yup, it does add something doesn't it? Especially in the later rounds after you have been doing well. It is hard not to start thinking just a bit about the pot.