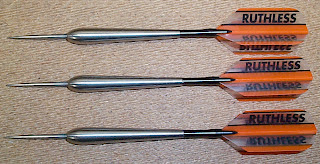 These beauties were custom made but not for me. They we commissioned by a guy in Canada who ended up deciding that he did not like them as well as he thought he would. The craftsmanship is remarkable, and the balance quite nice. So far in the 2 hours I have owned them I have hit several low tons and at least one ton-40. I am thrilled to have them. I call them NT's for the same reason I call my other similar set my "CT's". NT stands for Nickel Tungsten.

glad you like them zeeple..the ones i got from you are great.. thank's Griff

No problem Griff. I think we put together a pretty good trade.

neat, how much would those cost?

Well I didn't pay anything for them so I really don't know. however, I fully encourage you to contact Jeff Pickup and find out! His contact info is here: