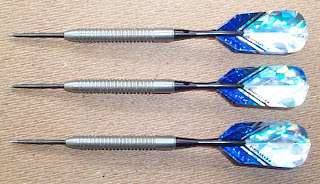 These darts are nice little darts. I never knew what they were until a fellow dart geek immediately pegged them as 21 gram Assassins. Aside from being amazed that he could identify them so specifically within seconds, I was surprised because I never found the Assassin range to be that appealing. If these truly are those darts, though, they must be a much older version because these grooves are more widely spaced than the current version. I have not Ton-80'd with these, but I have hit a nine count in the 19 bed with them.
Posted by Zeeple at 2:11 PM