I am very glad I decided to back blog my various collections. This way I can simply go to the Month that holds the collection I am looking for and peruse. Usually I keep all my darts in their cases in a box in the attic or somewhere else due to the occasional bout of minimalism that comes over me. So when I am feeling restless with a particular set of darts I can take a quick look at my collection without having to break them all out. I know what I have by scrolling down the page. I did this the other day and saw my KC's by Laserdarts and decided to break them out and see how they did with the nylon dynastar stems I have been using lately.

Wow am I glad I did. I have been burning up the board with them. A week or so ago I did a best of three match against mcvickj on ezchalk and I won in two. And that is saying something because he is quite a good shot! In practice with them I hit several 120+ shots a couple ton-40's and even a Faux Max. The hat trick shot below is what made me think of the idea of "rediscovering" darts. 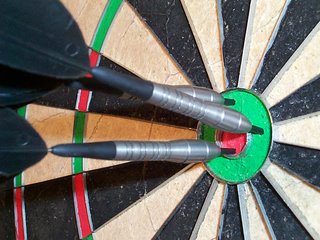 It seems that one of the benefits of owning a lot of sets of darts is the opportunity to see starkly how your throw has changed. And I believe that sometimes our throw changes without our realizing it. It is similar to owning a puppy and thinking that she seems to have stopped growing but your neighbor says: "Everytime I see her she is so much bigger!" Because we live with our throw every day we do not notice the microscopic changes that settle in. But pickup a set of darts you used to throw with and it is more obvious that something is different. The KC's for example were fun when I first got them but I eventually set them aside because I thought they just were not throwing well for me. Now I think my throw has improved to the point where I can use them with reasonable success.

Changing stem or flight preference is another great way to rediscover old darts. I have fallen back into the spinning flight frame of mind and I have been using my dynastars lately. I have changed my stem and flight preference many time in the past and it seems that when I do I always break out the darts again thinking, "I wonder how these would do on GT's..." etc etc. In the weeks the have passed since I started this post I have now moved on to my old favs the 16 gram Radarts with dynastar stem and flight.