Last night I was in an excellent beer bar for a Belgian beer fest and they had a dart board. So my friends and I got up to toss a couple. It was only a soft tip board, but we had fun despite that short coming. I'd forgotten how big the targets are on a soft tip board!! I happened to have my "just in case" darts with me which can be configured for either steel or soft, and for once in a long long time, I was required to load the plastic tips instead of the steels to get some darts in. Here is the set we used, and which I ton-80'd with: 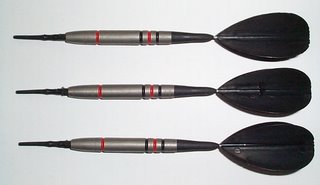 They weigh in at 17 grams in this configuration. As seen they are wearing dynastar stems and flights and have the lightest, brass, insert in them to make them light ennough for soft tip. When I have them built for steel tip I have the tungsten inserts in them which adds about four mor grams per dart. We started out playing "Cricket/200" and to be honest I have no idea what the heck the 200 means, as I tried to get 200 points to win but that didn't work. I ended up having to close everything and then I won. After years of steel tip the soft tip world has become a mystery to me. At anyrate the guys I was playing with were not very good but they enjoyed it well enough. I talked them into playing SIDO 701, and in this game I got several tons, a ton 40 and this is when the ton-80 occurred. I do not have a picture unfortunately. I asked the guys if they had a picture phone and they said no. :( I finished that game with a two dart out. I had 73 left, stepped up to the oche and hit trip-19 double-16 as casual as you please, still holding one of my darts. It was fun.

But I wish they'd had a steel tip board.
Posted by Zeeple at 3:30 AM

Thanks jsobo119!! It feels nice to hit them from time to time.

Hi Gazza, thanks for visiting the Blog. Good catch on my numbers mistake. Indeed I hit the d8 to win not the d16. And it was an electronic board thus when it told me I was the winnner I am sure I had calculated my outs correctly at the time despite many good Belgian beers. BTW, awesome that you are sponsoring Paul Williams now. I always recommend your shop to my friends and online contacts and I will continue to do so.

anon: thanks for the tip on the Cricket/200. I suppose if I'd read the ruls on the machine I could have figured it out but I just sort went with my assumptions and concentrated on having a good time. Netx time I'll try to close the numbers!

Are the trebles bigger on soft tip? If so, surely not a proper 180? If no then congrats :)

Thanks anon! And to answer your question, I am not sure if the area is bigger or not but being a semi-purist, I am tempted to say that the triple 20 on a soft tip board is indeed larger than on it's sisal cousin. However, there are a few reasons why I consider this a proper Ton-80:

1. All three darts were fairly and accurately in the triple 20. Regardless of size I earned 180 points with the throw.

2. I only have a couple handfuls of Maximums to my name thus I guard all of then jealously.

3. I had two witnesses. Most of my Ton-80's occur in practice at home and I have no way to authenticate them to the discerning public (although I do not consider that important really - I do not care who believes me and who doesn't). The witnesses are important because I was able to impress two people with my admittedly meager dart skills.

LOL. But thanks for the congrats!!