There is a Canadian who goes by the online moniker of Dax. He is always giving me terrific advice on how to become a good dart player, how to improve and especially about the mental aspect of the game. His most consistent advice to me (and this has come from other people as well) is to stick with a single set of darts. That is very hard to do as I really like all of my darts. It is like giving someone a huge satellite Tv package and telling them never to turn the channel. How can I never throw the Widows again? Or the Rhinos or the Warriors or the... You get the idea. Realistically, I have become so enamored to the 16 Gram Radarts that they are all I really throw much these days anyway. So it will not be so hard to not throw the others. I can always break them out between seasons for fun, or during parties when there are a lot of people throwing. So I have actually gone through the trouble of packing up the darts I don't use that much, boxing them, and sticking them in the attic. I only have three sets of darts near my board now, and stick to those only. Here they are: 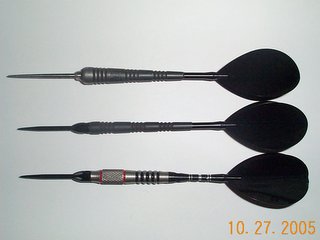 Also. I am going to reduce these to only two sets soon. The top two have something in common and the bottom two have some thing in common. The top two darts are both GT3's by Bottelsen and I like the feel of them as well as the fact that they wear similar clothes. Since this photo was taken I have tried a few different points on the 16 gram GT3's (middle set) but now they are wearing hammerhead points just like the 27 gram set (top). Oops, in the picture the top set is wearing the Pickup Points. Now they are both wearing HH points.

The bottom two sets are both 16 gram. I have been gravitating to lower weights lately and the 27 gram GT3's are likely to me the next to be pruned from my throw set. But for some reason the 16g Radarts (bottom) have a dramatically differnt feel to them and throw much better than the GT3's of the same weight. This may also be a factor in the decision. I may even demote both GT3's and call up some other dart from the collection to serve as the second set. Remains to be seen. League ends on Tuesday so I may even take a closer look at the LCT (Less Commonly Thrown) darts to see if there are any overlooked gems in there given my reduction in weight preference recently.
Posted by Zeeple at 7:27 PM

Hey Bro...thanks for the kind words on my blog. I would like to get together for a few games, as I have a bit more time right now. I tell you what, if you play soft-tip at all, there is a big tourny this Wednesday night @ a bar in Sharpsburg called "Backstreet/13th street pub". It is the Turkey Shoot, that is always run the night before Thanksgiving. Good times should be had by all, so if you need any info just let me know and I can hook you up.

Have a good one-
Patrick

ok I posted my darts on my blog...

I'm going to make just one more switch too ; Moving from 27grms to 26grms, virtually the same shape, smaller points. And that's it for the rest of the season.

Interesting. Are you just going to drill a gram out of the back of your current darts or are you going to buy more? There are pros and cons to both...

I'm switching from 27grm Hi Tec "The Vice" to 26grm Alan Glazier "Shark Grip". They're very similar in legth and shape, but the Glaziers seem to suit my new grip better. I've already got a set of these.

Patrick: not much of a soft-tipper these days. Infact all my soft tip darts are now steel tip darts, wearing either HH points or conversions. However, now that league is over I am welcoming a respite from the sport. I will likely take down the board and just not throw for a few months while I burn off the burn-out. Lets figure on next year!

Tommo: at one point in time I had really been salivating over Alan Glaziers Black Diamonds. When I got them I was very disappointed. Only darts I ever sent back for exchange!