Some of the folks over at Sewa Darts came up with the idea of a dart swap. A good way to trade those iffy purchases for something you'd rather have. All of the darts below are darts that I like, but either 1. have some element to them that I'd prefer to change, or 2. are darts that I have more than one set of. So here are the first offerings with a description as well as the reason they are for trade. Also, I am willing to trade them as pictured, barrel only, or with just about any other combination of stem and flight. 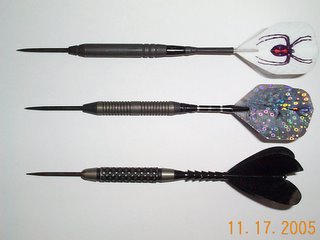 Top to Bottom descriptions for the photo immediately above:

1. 28 gram fixed point smooth blask widows. Slightly worn. I'd prefer to trade these for either lighter black widows or black eagles. The only reason I am willing to trade these is because 28 grams is too heavy for my taste. If no one wants them I will likely have Jeff Pickup "illusion taper" them.

2. 25 gram fixed point black "edge grip" Great Whites from Bottelsen. Hardly used. I'd prefer to trade these for other bottelsens, possibly Hammerheads. I like the grip on these darts pretty well but something about them doesn't fir my throw. Perhaps they are too fat (9/32" barrel) or slightly too heavy.

3. 24 gram Powerpoint Dimplex. As is. I'd prefer to trade for other powerpoints but I guess I am open to almost anything. I like the grip on these darts but I wish they were thinner and longer. 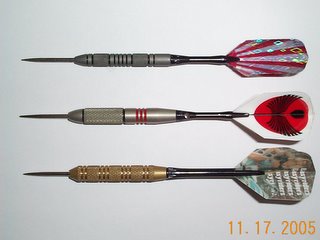 1. 20 gram fixed point Halex Tungstens. These are in very good condition and the only reason I got them in the first place is so I could have a backup set for the darts my girlfriend got me one Christmas. The trouble with them is that they are 20 grams whereas my originals are 22. Thus they are not really backups.

2. 20 gram fixed point Halex Nickel-Silvers. These are probably the first set of steel tips I ever bought. I like them okay but I don't use them much anymore so I am willing to trade them.

3. 18 gram fixed point Halex Brass. As brass darts go these are gems. I have three sets of them though so losing one set is no big deal to me. 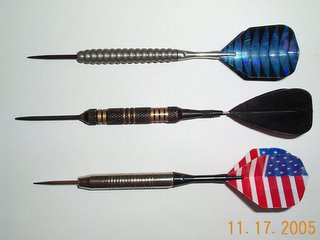 1. 27 gram fixed point Harrows Axis. When I first got these darts I liked them quite a bit and threw with them fairly often but I have migrated to the lighter weights and so do not use them much anymore. The grip is very unique. They are very slightly front loaded but I consider them middle weighted darts.

2. 19 gram moving point "Hawkeyes". These may be Halex darts but I am not sure. I cannot remember where I got them and their case is long gone. As pictured they are wearing hammer head points and dyna-star stems. Be warned though, if you want the hammerhead points you can but one is bent a little and I have never bothered to straighten it out. I bought them that way from a store in Elizabeth, PA, and didn't notice at the time.

3. 17 gram fixed point who knows what they are darts. These darts are terrific. I have two sets otherwise they would not be up for trade. I have no idea what material they are made of. They are mostly smooth darts but they have very slight rings in the barrel, just enough to give them an "almost texture." The threading in the back for the stem is 1/4" and I have bought 1/4" aluminum stems for them.
Posted by Zeeple at 8:29 PM

I like the look of the 20 gram fixed point Halex Tungstens... if I had anything worth trading I would... Perhaps I will sell my pool cue and buy more darts... lol

Yes, the Halex Tungstens are a very special dart. I have a set of them in the 22 gram weight which I completely love. And my good buddy Barn has a set too. He always threw them in our first league season together and he was quite dominant with them. If you ever DO decide you wanted to trade for them let me know.