OOoOO stands for: Odd Out on Odd Only.

Most people I know and with or against whom I play league matches will take a shot at any double for the out regardless of the wedge they are shooting at and regardless of the number of darts they have left. They figure, you have a chance to win, so take it. I agree with them in part that if you CAN win in that round you SHOULD, but not in a reckless manner, and not in such a way that you are left with an odd number, holding a single dart. See below for details. 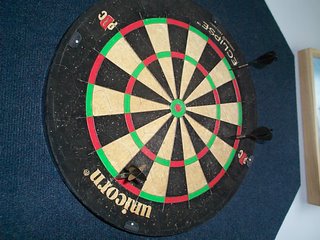 The above pic tells a story, and outlines what I consider to be a good darts throwing policy. Funny that this policy should be acronymizable into a string of O's. O's play an important role in our language and literary history, as well as in software.

In the realm of software for instance there is a really awesome and full featured office suite (doc writer, spreadsheets, etc) called OpenOffice.org which is often shortened to OO.o. This program is completely free and allows you to not have to shell out hundreds of your pretol dollars for expensive software. It is far better to be able to drive around your ridiculously large SUV and have enough money to feed it.

Another interesting significance rendered by the letter O is the possible discovery of the real author of the Shakespeare plays. There is a scholar out of the University of Washington that has used linguistic analysis to discover that the real author of the bards plays is none other than the little know Edward de Vere. Don't ask me the role that O plays in this discovery. Rather just trust me on it.

And even more interesting is that the letter 'O' is homyniminous to the utterance that escapes the lungs of us who are slow to understand, "oh". And this brings us full circle to the idea that you shouldn't shoot your second dart at an odd numbered wedge for the out because, when I am looking at an 18 out (double 9) and I am standing there at the line with a single dart in each hand, I think: "Oh." And I step back for a second and reconsider my options. If I miss into the fat single I am left with an odd number (9), a lonely single dart to do it with, and that is just impossible. Better to spend that second dart setting up a better out. Look at the picture above again and I will tell you how it came to pass. I was looking at a 32 out with three darts in hand. I shot the first at the double 16 and missed into the double 7. Ouch. This left me with 18 and two darts. If I were to have shot the second dart at the double 9 and missed into the single I would not have been able to go out that round, so what I decided to do was to shoot my second dart at the blade between the single 6 and the single 10, knowing that either result would leave me with a decent out. I hit the single 10, and so with my last dart I was able to take out the 8 by hitting the double 4. Long winded but easy to follow I hope.

So what does odd out on odd only mean? Well, if I am looking at an out that requires hitting the double of an odd numbered wedge, I will only shoot at it if I am holding an odd number of darts (1 or 3), and not an even number of darts (2). If I have 18 left with three darts, sure, take the shot. If you miss inside then you have two darts to take out 9. If you miss outside then you have to move on to a different out strategy. And like wise, if you are holding a single dart in your hand and you can win by hitting any double on the board, then shoot with confidence. You should always always take the shot regardless of the wedge. So this is the essence of my policy I call OOoOO (pronounced "Oooh.").

And guess what? As you can see from the above pic, I hit my out so it paid off. As fate would have it, just a few hours later I was again looking at 32 out, and missed into the double 7. What are the chances? I again hit the single ten, and again hit my double 4 out to finish. Here is the second occurance: 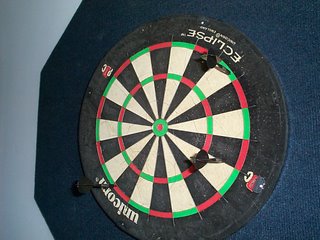 I'm afraid I'm not convinced, and I'd prefer two darts at D9 rather than just one dart at a "good" double. Missing the double doesn't always result in a split afterall, and two chances are better than one when your opponent may checkout if you miss.

The OpenOffice suite is excellent. I tried it on your recommendation and it appears on most PC magazine cover disks each month. They have some speed issues with the spreadsheet, but nothing a home user would ever notice - only on sheets which would take Excel 30 minutes to calculate. Who has one of those!

I would never waste a dart that could be the finish dart.

Ah, then the two of you would seem to agree with everyone else I shoot with!! I seem to have the opposite opinion to the common wisdom. Hm. Well I will of course keep an ever open mind and perhaps some day I will come around to your way of thinking, but I will not risk leaving myself an odd number with one dart left.

I think you are giving away a dart..

I am starting to come around to your way of thinking jsobo. So many people have said that I'm nuts that I now question my reasoning in this matter. I will think (and throw) on it some more at any rate...