Not For Lack of Space

Last night during 60s practice I hit this nice shot. It was two darts in the 60's with one dart in hand, but the two that were already in there were very nicely aligned. Not only were the first two darts stacked vertically on the far left of the treble, right just inside the wire, but they were also leaning out just a little bit, so their flights were not obstructing the treble at all! What a great set up for a Ton-80!! How could I miss, the treble was wide open!?! 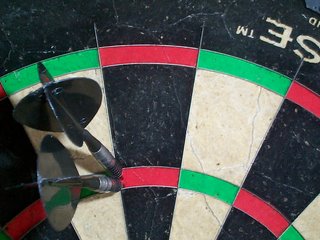 I missed. The shot turned out to be a ton-40. Still a good score but I would have dearly loved for that to be my fifteenth ton-80. In fact the third dart hit the twenty bed just under the treble so I removed it for this shot to be taken. Its flight was completely obscuring the triple and I felt the blog would be better served with it out of there. It seems I have been hitting better over all scores lately ever since I decided the first practice priority (see this post) should be the Sweet Spot. So I don't even bother with doubles now until I have hit my 20 60s for the day. If I have time for doubles then great otherwise no worries I'll get em sometime. In fact I started in on the Paul Williams Challenge yesterday and found that I was hitting my doubles within the first three darts, so despite the shift in focus, my doubles do not seem to be suffering.

There is a concept in sports called 'Training to Specificity'. This basically means that the best way to train for a sport (any sport) is to play that sport. If you wanna become a better mountian climber you have to climb mountains. Pumping iron in the gym may be good for you and increase your strength and metabolism, but it is not good training for climbing mountains. If we were to apply this concept to darts then it would stand to reason that the best way to train for darts is to play actual games of darts against actual opponents. If this is true then I am doomed of course and all my practice routines and priorities are right out the window. But I can easily see how it would be. I think it is also important to train to the various levels of pressure in darts as well. For example, playing against your buddy whom you've beaten a gazillion times is not the same as playing against that one sandbagger in league who is known to be almost unbeatable. So you have to find a way to train for that. Playing against a superior, unknown opponent would be a good way to do it, but how? Travel the bars seeking out games? Most of the bar players out there barely know the rules. I think the best way to get better at darts when you are new is to play in leagues because then you have a wealth of people who care about their dart game to play against. And then once you have risin to the top 10% in B League, move on to A League. (This is what I plan to do. If my former teammates do not wanna have a B team again this year I am going to try to find my way onto an A League team.)

So what if an A League player wants to train for tournaments? My best guess is that the best way to train for that higher level of pressure, which is generated in part by a higher level of play as well as in part by a higher level of spectation, is to attend as many LotD's as possible, and hopefully as many tournaments as possible. Of course this is all speculation. I am still a lowly B Leaguer thinking forward. Somday perhaps through you may see me on TV! Haha until then cheers and hasta verte christo mio.
Posted by Zeeple at 10:34 PM